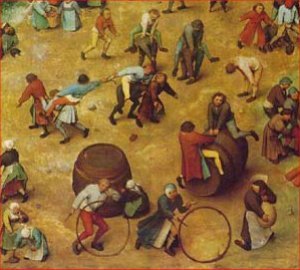 Pieter Bruegel (PE ter BROY gul) was born in Belgium. (Sometimes his name is spelled Brueghel.) In 1551 he became an apprentice of an artist, Aelst. He traveled to Italy about that time and painted many pictures, mostly landscapes. He was about 26 years old at the time. He studied art with Pieter Coeck and married his daughter Maiken. They moved to Brussels to live.

His paintings were very popular in his time, and are still popular today, over 400 years later.

In the painting "Children's Games", he shows children playing all sorts of games. Children today still play versions of some of the games shown.

He liked to paint a lot of small figures in a large space. 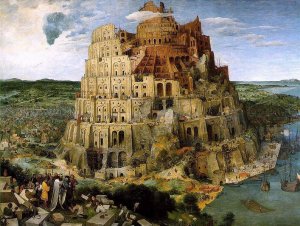 According to one writer who lived during Bruegel's time, the artist would show up uninvited at local weddings and village fairs. If he and his friend were going to a wedding, they would dress up as peasants, buy gifts for the bride and groom, pretend to be friends of the families and "crash" the party. They would mingle among the guests and visit with them. In this way he got ideas for his paintings and they were authentic.

In the painting "The Peasant Dance" the colors are not quite as bright as the vivid colors in "The Peasant Wedding". Notice the miniaturization of the woman and child in the foreground of the picture. They are out of proportion to the rest of the figures in the painting. 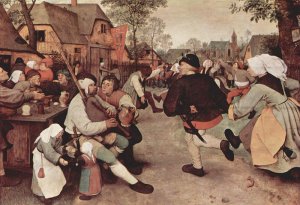 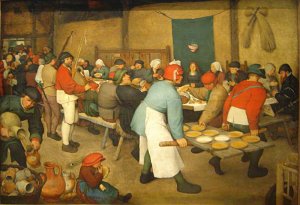 "Landscape with the Fall of Icarus" is a painting which depicts the story of Icarus and his tragic end as he drowns in the sea. (Observe his legs as he goes under the water in the lower right-hand corner of the picture). The painting includes high mountains, but there were no mountains in the area where Bruegel lived. Once he traveled to Italy to study the works of the great artists there. He was able to view the Alps and he sketched many pictures of the tall mountains. When he returned home he painted landscapes and included the ideas he had gained on his trip. One biographer said that Bruegel "swallowed the mountains on his Italian trip so he could spit them out later in his studio". 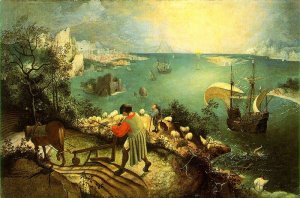 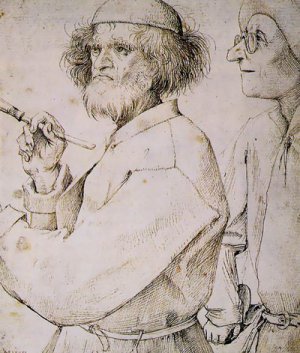 Other Activities
View a slideshow about Pieter Bruegel the Elder

Paintings by Pieter Bruegel the Elder

Biography of Pieter Bruegel the Elder

Pieter Bruegel Art in the Classroom

How do you pronounce Bruegel ?


Music: Gregorian Chant "Kyrie Eleison" sung by the monks of the Abbey of Notre Dame

Books
Press "Go" to search for books about Art for Children.
Library

50 Artists You Should Know
by Thomas Koster, Lars Roper (review, no preview)