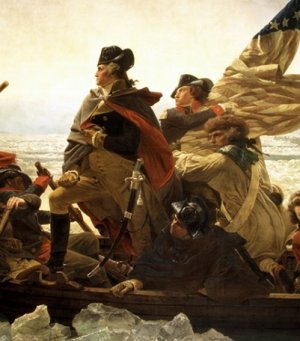 Emanuel Gottlieb Leutze (LOIT suh) was born in Germany. When his father became ill Emanuel spent many hours sitting by his beside sketching. After his father's death he decided he would continue with art. He studied in Philadelphia, and in 1859 he moved to New York.

A publisher saw some of his work and hired him to paint portraits of some of the leaders of the country, but he couldn't get them to sit for him. He left dejected and spent some time in seclusion.

His first successful showing was a painting called Indian Contemplating the Setting Sun. He traveled to Europe and in Dusseldorf, Germany became the pupil of Lessing, a fine painter there.

Also successful was his painting of Columbus Before the Council of Salamanca. It was so well received it was purchased by the Art Union of Dusseldorf. He went to Munich and painted another great scene about the explorer, Columbus Before the Queen. We see him before Queen Isabella and King Ferdinand trying to get funding for his anticipated voyage. She rejected his plan several times over a period of about two years, but finally agreed to help him. 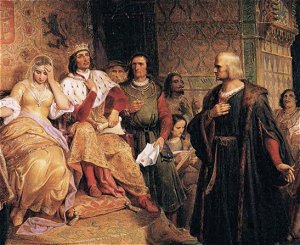 Columbus Before the Queen (detail)
Enlarge

Leutze painted two versions of Westward the Course of Empire Takes Its Way. The 1861 version which we see here is in the Smithsonian Art Museum and the 1862 version is in the United States Capitol. It is a 20x30 foot mural which took him two years to paint. He received $20,000 for it. With the money he moved his family back to America and settled in Washington D.C. You can copy and paste the url to see that version. How do the pictures differ and how are they alike? 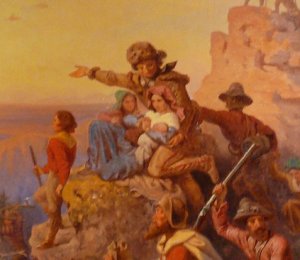 
He traveled around Europe but returned to Dusseldorf, married and remained there fourteen years. He returned to the United States and opened a studio in New York. He had been away for eighteen years.

Leutze became famous for his paintings of American historical scenes. The featured painting Washington Crossing the Delaware is the one for which he is remembered.The painting itself is quite large, 12 feet high and 21 feet long.

The painting is a record of a notably historical event which took place on Christmas Day 1776. The powerful picture features a calm, determined George Washington who commands the troops. They landed on the New Jersey shore at 4 A.M. on December 26th and then marched nine miles to Trenton. The British troops were taken by surprise and the Americans won a decisive battle. The Hessians lost 80 men and 900 were captured. The Americans lost four men, two in the fighting and two men froze during the crossing. The battle at Princeton, also followed the landing.

Leutze grew up in Philadelphia and likely visited the place where the crossing took place. He made the painting in Dusseldorf, Germany. It took him two years to paint it. At one point there was a fire that partially destroyed the first canvas he started. He used the Rhine River as his model for the Delaware River. He had visited America many times and had studied paintings of Washington and had looked at his uniform in the museum.

Other famous people crossed the river that night. Among them were James Madison and James Monroe. James Monroe is the man in the boat who is holding the flag.

You will also enjoy reading about the black patriot, Prince Whipple, who is in the picture. They say that he was in Baltimore at the time of the crossing.

Other artists who have painted the crossing are Thomas Sully and George Caleb Bingham. They each show Washington on horseback. The black man, Prince Whipple, appears in both the Leutze and Sully rendition. Leutze's painting is the most dramatic of all the works done of the event.

Each painting of the crossing contains inconsistencies. The flag shown is not accurate. That particular design, the Betsy Ross flag with 13 stars and 13 stripes was actually created six months later according to the account at American Revolution.org.

Leutze also painted portraits. The portrait of Nathaniel Hawthorne was painted in Washington D.C. when he was working on the Westward mural at the Capitol. Hawthorne was a prominent writer in the 1800's. You can find his books here. 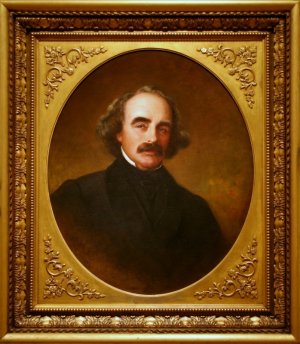 Julius Erhard was a German manufacturer. You can read a German Translation story about Erhard. 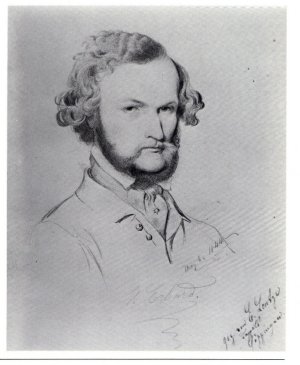 The third painting The Amber Necklace shows a mother and child. In European countries amber necklaces are put on babies and supposedly the effect of the amber as it is warm on the skin helps to ease the pain of teething and soothes the baby. 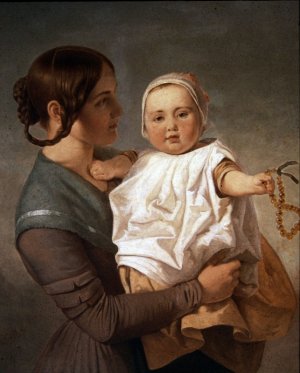 Emanuel Leutze was a warm and giving person, always ready to lend a hand to new artists. He helped financially and gave them a place to work. He died at the age of 53 after having a stroke. 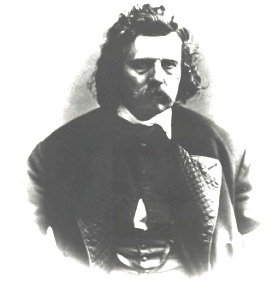 The Battle of Trenton

Washington Crossing the Delaware
notes about

Books
Press "Go" to search for books about Washington Crossing the Delaware.
Library

Stories of Our Country
by James Johonnot 1887 (full view)

Crossing the Delaware: George Washington and the Battle of Trenton
by Arlan Dean (selected pages)