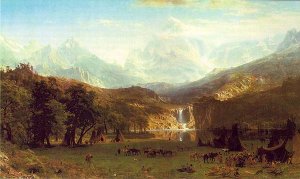 Albert Bierstadt (BEER stat) was born in Prussia, which was a large German state. (This land today is in Germany, Poland, and Russia.) He came to America with his parents when he was two years old. He grew up in New Bedford, Massachusetts.

As he grew up, he taught himself to paint. Then he decided to go to Dusseldorf, Germany to study with a group of artists. They toured Europe. He took photographs and made sketches from which he later painted landscapes. Sometimes he put himself in dangererous situations just to capture a particular scene. He stayed in Europe four years and then returned to the United States.

He painted the magnificent scenes in Yosemite. When people saw the paintings, they wanted to go there and see it for themselves. As a result, so many people went to Yosemite, that the land was no longer unspoiled, and Bierstadt went elsewhere to paint.

In 1859 the artist made a trip to the Colorado and Wyoming territories with Frederick Lander, who was in charge of a government survey expedition. He was inspired to paint this beautiful scene of the Rocky Mountains. Indians are encamped in the valley. They are not the main focus of the subject, but they are important to the overall effect. The mountains and the sky are the subject. He highlights certain areas of the painting to add interest. This is a large painting; six feet high and ten feet long. 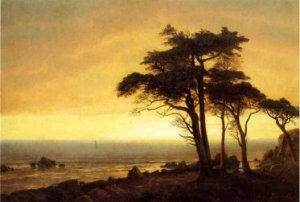 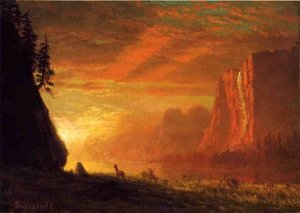 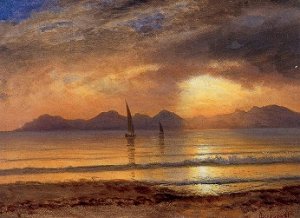 Sunset Over a Mountain Lake
Enlarge

After Colonel Lander died in the Civil War, Bierstadt named the highest peak in the painting Lander's Peak. The painting sold for $25,000 in 1865. That was a lot of money in those days. Later, it is said, he bought it back and either gave it to his brother or sold it to him.

In 1867 he married, and he and his new bride went to London. There he met with Queen Victoria. His wife, Rosalie, needed to live in a warm climate for health reasons. She lived in Nassau, and her husband began to paint the tropics of Nassau as a result of his stays there.

He died suddenly in 1902 and people seemed to forget his work until the 1960's. People became more interested in preserving our national lands, and his paintings began to be shown again. 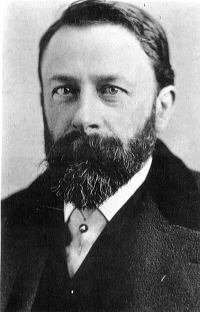 Biography of Bierstadt
from the National Gallery of Art

Paintings by Bierstadt
at Wikipedia

Modern painters and their paintings: for the use of schools and learners in art
by Sarah Tytler 1873(full view) Order

American painters: with one hundred and four examples of their work engraved on wood
by George William Sheldon 1881 (full view)

What Every American Should Know about American History
by Alan Axelrod, Charles Phillips (selected pages)