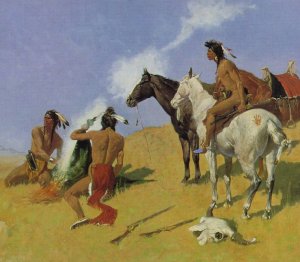 Frederic Remington (FRED rik RIM ing ton) was born in 1861 in Canton, New York. His father who was a colonel in the cavalry, was a commander in the Civil War. He told his son stories about that era. He sent Frederic to a military academy, but the boy was not satisfied there. They sent him to study art at Yale, but his main interest there was playing football. He returned home when his father died.

Remington was a person who liked to hunt, fish, and ride horses. He was a large person; just 5'9" tall, but he weighed 300 pounds.

He tried different jobs, but he just couldn't "find himself". He bought a sheep ranch in Kansas, but it was unsuccessful. Next he tried other kinds of businesses; a hardware store and a saloon. He first visited the Montana Territory in 1881. The West was changing fast as more and more people migrated. Remington wanted to record the lifestyle of the times. He drew Cowboys of Arizona Roused by a Scout on some wrapping paper and mailed it to a New York magazine. It was printed on the magazine cover of Harper's Weekly in 1882. You can find it on this page of Prints Old and Rare of Frederick Remington.

His illustrations began appearing on other publications and he became famous for his drawings. He drew a picture of soldiers in the Army. In US Buffalo Soldiers Marching in the Desert he drew himself in the picture. He is the second man in the line.

Even though Remington was born in New York and raised in the eastern part of the nation, he became well-known for his western scenes. He was fascinated by the Western culture and made trips to the West to get ideas for his work.

He began painting pictures of the West and Indians. He loved drawing horses. His paintings of horses make you feel as if you can see the horses running. He brought western items back to his studio in New York to use as models for his art work. He even had barn doors put on his studio so that he could bring the horses inside. His drawings appeared in Harper's Weekly magazine, but he was disappointed that people were more interested in him as an illustrator of books and magazines than as a serious artist.. In his lifetime he produced more than 3,000 drawings and paintings. 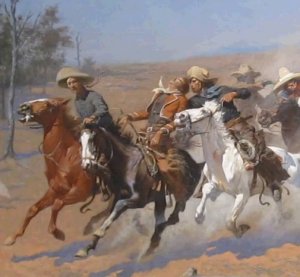 A Dash for the Timber (detail)
Enlarge 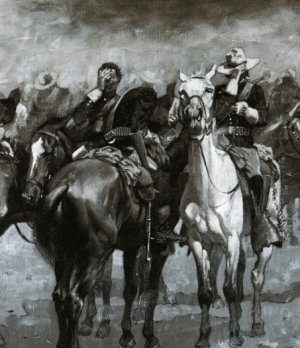 The Siege of the Fort at Detroit depicts the 1763 siege of the English fort by Pontiac, the Ottawa Indian chief. The city of Detroit, Michigan now stands on the site of the fort. Why do you think the trees are cut down around the fort? 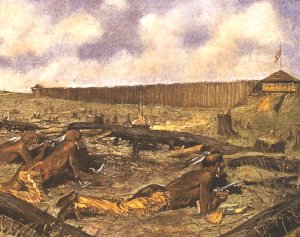 The Siege of the Fort at Detroit (detail)
Enlarge

Remington's paintings and drawings were two-dimensional works of art. They had height and width. Toward the end of his life he decided he didn't want to just make "flat" pictures anymore, so he started making bronze sculptures of cowboys and western scenes. A sculpture is a three-dimensional work of art. It has height, width, and depth. You can view the work of art from all sides. He made 22 sculptures in all. The first works were made by sand casting and the later ones with the lost-wax process. (See Research Links for more information). His sculptures of cowboys on horses are prized by many museums and collectors. 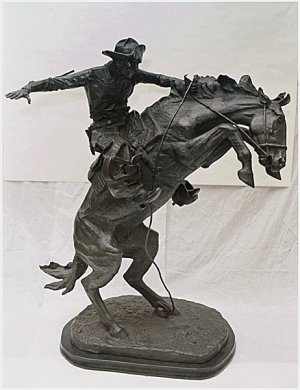 At one time he was sent to Cuba to illustrate scenes from the Spanish-American War. Douglas Allen wrote a book about Remington's time in Cuba.

He loved a woman named Eva Caton (Caten) and he wanted to marry her. He proposed to her three times. She refused his proposal twice, but the third time, she said she would marry him.

He died at the age of 48 after having surgery for an attack of appendicitis. 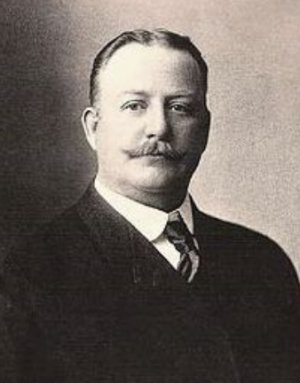 Frederick Remington (audio)
Roosevelt, Remington, and The West (audio)
Engines of Our Ingenuity.

How to Understand Sculpture
Online book by Margaret Thomas

The Way of an Indian
by Frederic Remington 1906 (full view)

John Ermine of the Yellowstone
by Frederic Remington 1902 (full view)