PORTRAIT OF A MAN IN A RED CAP 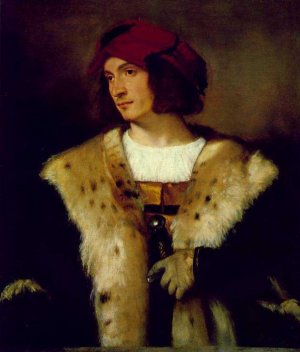 Tiziano Vecellio da Cadore whom we know as Titian (TISH an) was born in the Alpine district of Italy. His birthdate has been set as early as 1477 and as late as 1495. We are really not sure when he was born. The Vecelli family was noble, but not wealthy. His father's name was Gregorio, his mother was Lucia, his brother was Francesco and his sister's name was Orsa. He studied with the famous painters Giovanni Bellini (je o VAHN neh bel Lee nee) and his brother Gentile Bellini(jen TEE lay bel LEE nee) and also with Giorgione (johr JYOHN ay).

He married a woman named Cecilia in 1525 and they had four children, but only three of them survived, his sons Pomponio and Orazio and his daughter Lavinia. Cecilia died when the last child Lavinia was born. Titian's sister came to help him with the family. 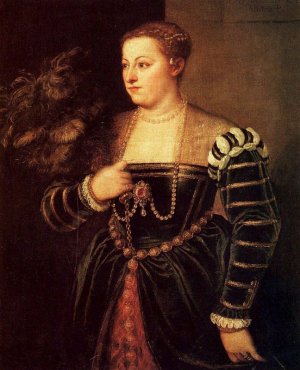 He became most famous for the portraits he painted. He had some important friends who helped him. He was honored by Emperor Charles V (the Fifth) who named him Count Palatine of the empire and a knight of the Golden Spur. These were great honors for him to have. The Emperor gave him a beautiful gold chain. Titian was so proud of it he wore it when he painted portraits of himself. He painted a picture of the Emperor on horseback as well as the Emperor's coronation and other portraits of him. Sometimes the ruler even asked him to include family pets in the pictures. Even when Titian was the court painter, he was still able to live in his beloved Venice. 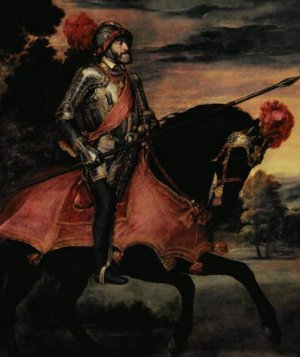 When painting the face of the person, he would paint it just as he saw it. He then would use milder colors and soften the facial features. People were quite pleased with the results because the pictures were flattering.

Titian used different size brushes. In his early works he used smaller brushes and included much fine detail. In some of his later works the brush was so big that one person described it as a "broom". He not only used brushes but developed a technique during the last 20 years of his life where he used his fingers and pieces of rag to apply the paint.

Pope Paul III painted by Titian was the pope responsible for excommunicating Henry VIII of England from the Roman Catholic Church when he divorced his wife. 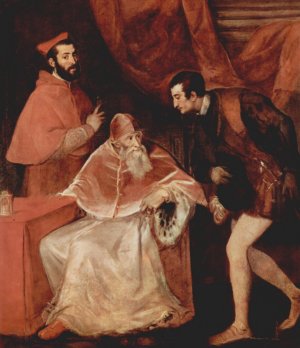 Titian painted a very large altarpiece called Assumption of the Virgin in the Basilica of Santa Maria Gloriosa dei Frari in Venice. If you travel to Venice today you can still see it there. 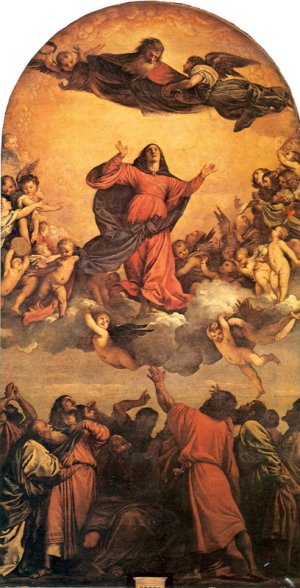 Assumption of the Virgin
Enlarge

After painting the altarpiece he was in great demand. People commissioned him to paint their portraits. He became a wealthy man and invited other artists to visit him in his home in Venice.

The painting of the trial of Jesus is called Ecce Homo, a Latin term which means "Behold the man". These were the words spoken by Pilate as recorded in John 19 when he presents a scourged Jesus Christ, bound and crowned with thorns. 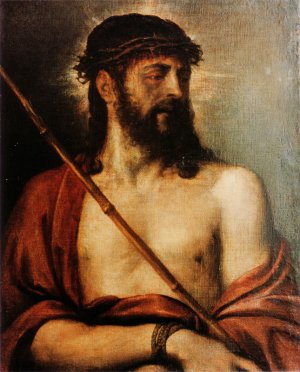 The painting of John the Baptist presents an image resembling "a reed shaken in the wind" rather than the fiery prophet portrayed in Matthew 3. Jesus is represented by the cross and the lamb. 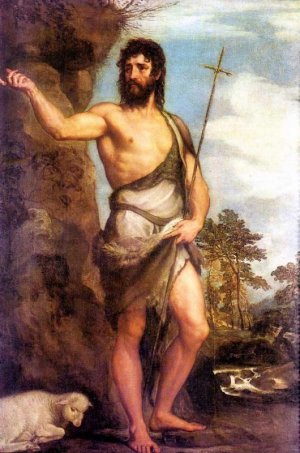 Oil paint first began to be used for making pictures during this time, and Titian became a master at using it to the best advantage. In addition to many portraits and religious scenes he painted in his later years mythological characters.

Canvas and board were expensive and sometimes painters would reuse a canvas by painting over a picture they had already completed. X-ray has revealed some of this repainting in some of Titian's work.

Titian died of the plague in 1576. He was somewhere in his 80's or 90's. Ordinarily if someone died of the plague they could not be buried in the church, but they made an exception for this great man and buried him in the Church of the Frari where two of his famous paintings hung; the Assumption of Mary and his altarpiece Pesaro Madonna. 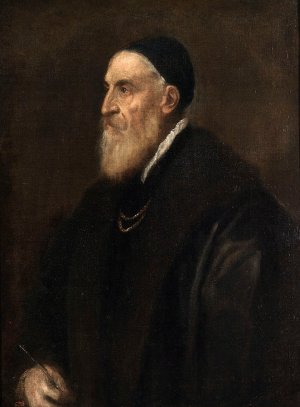 "The Supper at Emmaus"

Man With a Glove
King Francis

Books
Press "Go" to search for books about Titian.
Library

Titian: a collection of fifteen pictures and a portrait of the painter
by Estelle May Hurll 1901 (full view)

The Earlier Works of Titian
by Claude Phillips 1897 (full view)

The Later Works of Titian
by Claude Phillips 1898 (full view)