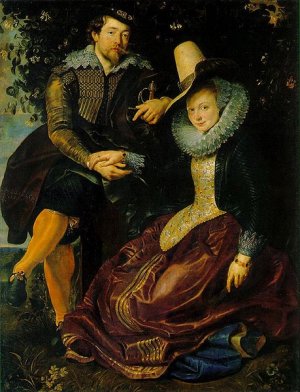 Peter Paul Rubens ( PE ter PAWL ROO bunz) was born in Germany in 1577. His father died when Peter was 10 years old. His mother returned to Antwerp, their home town, with the three children.

When his older sister was ready to marry, their mother spent money to provide a dowry for his sister. It was a custom for the bride to bring money to her husband when they married. The family didn't have much money left and Peter Paul, now 13 years old, and his brother had to go to work.

His mother placed him as a page, a boy servant, in the home of a countess. He stayed there for awhile, but he wanted to be a painter, so he was sent as an apprentice to a family member who was an artist. He then went on to work with other artists. He began to teach art at the age of twenty-one. 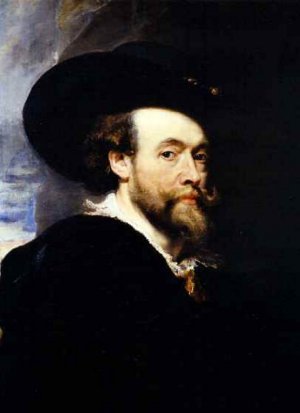 He married a young woman who was eighteen years old, about half his age. Her name was Isabella. The featured work on this page is a portrait he painted of the two of them shortly after their marriage. They had three children and she died after 17 years of marriage.

Four years later, he was married to Helene Fourment, a young woman only sixteen years old. He was 53. They had five children and he painted many portraits of her.

In 1618 he painted A Child's Head which is believed to be a portrait of his first child, Clara Serena, who died at the age of twelve. The painting of the child below, done in 1619, is supposedly a portrait of his son Nikolas. 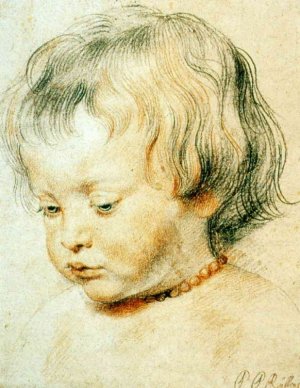 Head of a Child
Enlarge

The portrait of Helen Fourment and Her Children which he painted in 1635 shows his wife and two of their children Claire-Jeanne and Francois. 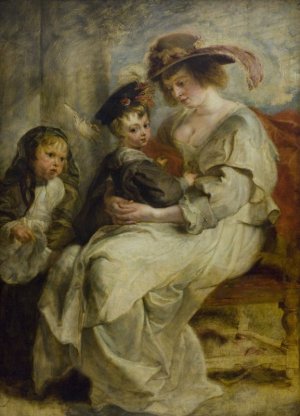 Helen Fourment and Her Children
Enlarge

His father's life had been filled with scandal and he spent time in prison. In contrast, Rubens was a devoted family man and led a peaceful life.

Sir Dudley Carlton, one of his admirers, described Rubens as "prince of painters and painter of princes" because he painted several members of royal families. He made decorations for the palace walls for Maria de Medici.

As an artist in the courts he could quietly observe what was going on, and he was asked to become a diplomat to help solve political problems.

He painted pictures based on the Bible. In Rome he painted the altarpiece The Madonna With Angels. Actually he painted the subject two times and the second one remains in the church. His commission for the altarpiece was so great he was able to build a fine home as well as studios and lodgings for his apprentices.

He had a regular assembly line to produce the paintings. He let the apprentices start the paintings and add the clothing, then Ruben himself would work the details which made the painting uniquely his own. He described the work of the apprentices as being by "well-versed masters". Two of these apprentices who became famous in their own right were Anthony van Dyck and Jan Brueghel.

The painting of the The Miraculous Draft of Fishes is a triptych, which means it is painted in three panels. It was commissioned by the Guild of Fish Merchants for the parish church of Our Lady in Mechelen. 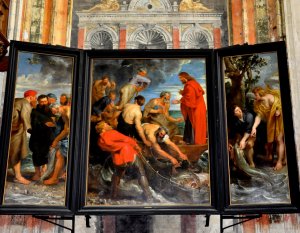 There are two accounts in the Bible of a miraculous catch of fish. The one in Luke 5 occurred at the beginning of Jesus' ministry when he called the disciples, and the other in John 21 after the resurrection. These were two separate events and the painting appears to be based on the event as recorded in Luke because it shows two boats, Peter is kneeling before Christ, and one disciple appears to calling to the others for help. Rubens made another painting of the same subject which is in the National Gallery UK. Many artists have painted pictures about this Bible story.

In 1600 Rubens went to Italy. The Duke of Mantua asked him to be his court painter. As the court painter he didn't have to pay taxes and was free of many of the rules other artists had to observe. The duke had a large collection of paintings and sculptures which Rubens studied. He also had a lot of different animals on his estate. The artist made drawings which he later used in his paintings.

Once when Rubens was delivering some paintings to the Spanish king he was caught in a downpour and the paintings were ruined. However, he saved the day by quickly creating more paintings to replace them.

In 1621 he was made a knight by Charles I of England. As he became more famous, he became richer and had a large house in Antwerp. He was a disciplined person. He got up at 4:00 A.M. and began his work. He ate very little during the day and shared the main meal with the family in the evening.

In The Four Philosophers Rubens includes himself as the figure standing on the left. The marble bust is the philosopher Seneca. 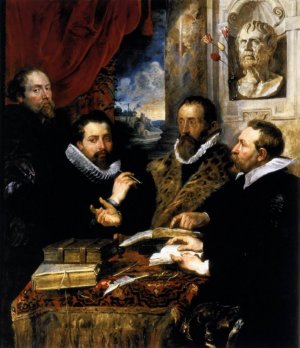 Jan Brueghel, shown with his family, was the son of Pieter Bruegel the Elder. He was apprenticed to Ruben and worked in his workshops. 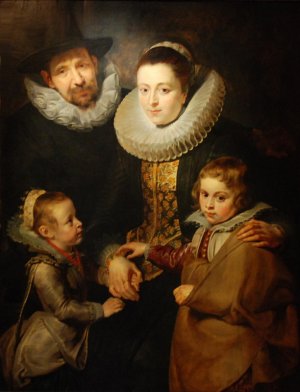 The Family of Jan Brueghel the Elder
Enlarge

In addition to painting pictures of people, he sometimes painted pictures of animals such as horses, cows, chickens, dogs, lions and tigers. Once he even painted a picture which included a crocodile and a hippopotamus! He produced several hunting scenes. If you look closely at The Tiger Hunt you will not only see the tiger, but a mixture of animals. 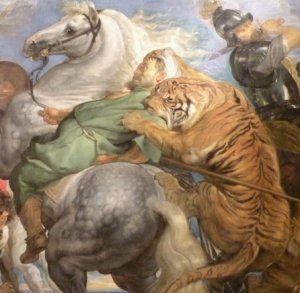 As he grew older he developed arthritis in his right hand, and it became difficult for him to paint. In his last years he began to paint landscapes, and he loved the countryside around his home. He died at the age of 63. He left his wife Helene, now age 26, a rich widow with children. Another daughter was born after his death. None of his children became artists as he had hoped. 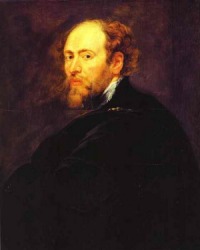 Other Activities
View a slideshow about Peter Paul Rubens

Information about Rubens
at Humanities Web

Art Works of Rubens
at CGFA

The Artist's Sons, Albert and Nicholas

Ruben's Portrait of His Two Sons
St. Nicholas, Volume 34, Part 1 By Mary Mapes Dodge 1907 (full view)
(When you get to book page 205 scroll up one page to view the painting.)