THE COURTYARD OF A HOUSE IN DELFT 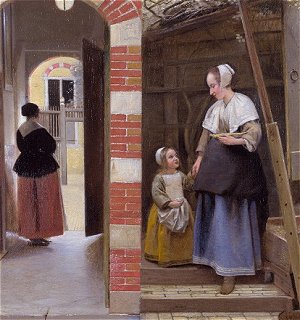 Pieter De Hooch (duh HOKE) was a Dutch painter born in Rotterdam. His father was a bricklayer and there were five children in his family.

When Pieter was 24 he began working for a rich merchant. He was a servant to Justus de la Grange, but was also a painter. He married a girl from Delft, the daughter of a pottery maker. Some sources say they had a large family, others say they had two children, a son Pieter and a daughter Anna.

Some of his early paintings were scenes of soldiers and taverns. He is noted for his courtyard scenes. After he had a family, he began to paint pictures of families and scenes inside homes. 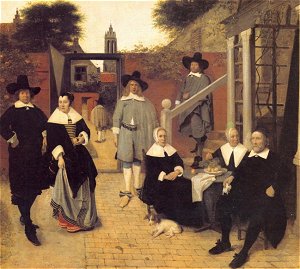 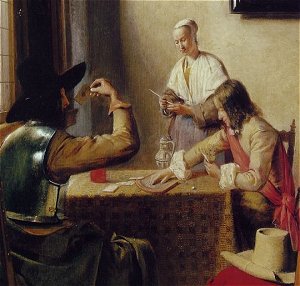 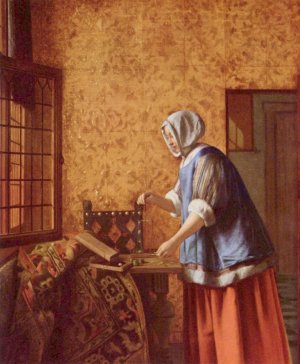 De Hooch and Vermeer were both working in Delft at the same time and their works had similar characteristics.

He liked to paint pictures that showed a lot of light in them. In the painting, Woman Peeling Apples, the sunlight is streaming through the window on the right side of the picture. It is a bright sunny day. Sometimes the light comes from another source as the next pictures in which the windows are on the left. You can observe elaborate tile floors in several of his works. 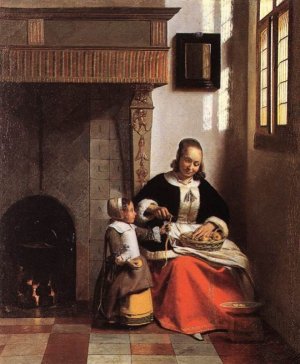 In many of his pictures you can see into other rooms, or you can see what is outside. Mother at the Cradle gives us a peek into the next room where the little girl is about to go outside. Notice the Dutch door which is made in two parts. The lower part can be closed and the top half will still be open. In this scene both the top and bottom portions of the door are ajar. 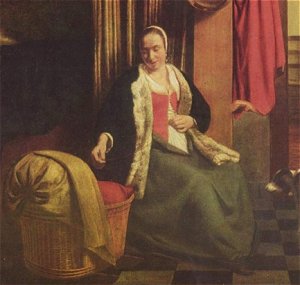 Mother at the Cradle (detail)
Enlarge

A Musical Conversation gives us a view of the street outside and people walking down the street. The man is playing an instrument called a cittern. What is the woman playing? 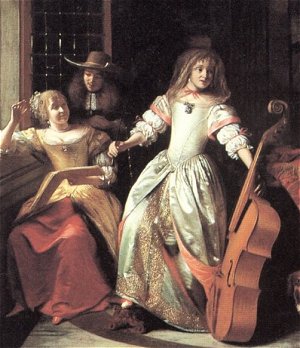 The only large picture de Hooch ever painted was destroyed in a fire in Rotterdam in 1864.

He was devasted by the death of his wife in 1667. Toward the end of his life his paintings became darker in color, possibly reflecting his mood. He died in 1684 at the age of 55 in an insane asylum in Amsterdam.

Other Activities
View a slideshow about Pieter de Hooch

Paintings by de Hooch
at the National Gallery of Art

Books
Press "Go" to search for books about Art for Children.
Library


Credits and Solutions
Songs of Praise and Armored Penguin