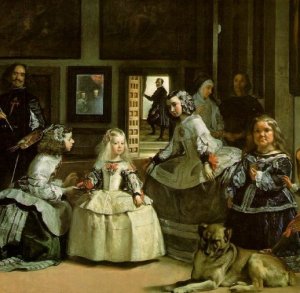 Diego Velázquez (DYAY goe va LASS kess) was born in Seville in the country of Spain. When he was about thirteen years old he was apprenticed to a painter, Francisco Herrera, but the man was such a tyrant Diego only stayed with him for a year. He next went as an apprentice to Francisco Pacheco who was very kind and helpful to him. He worked for him five years, then married Pacheco's daughter, Juana, who gave him two daughters.

With his family and his father-in-law, Pacheco, he visited Madrid where he was asked to paint the portrait of King Philip IV of Spain who was 18 years old. The Spanish king was so pleased, he asked Velázquez to move to Madrid with his family and work exclusively for the royal family. He was the favorite of the king's four painters. For the next forty years he and his family lived with the king. Even his mother and father lived with them. He painted at least 20 pictures of the king in all kinds of clothing.

The king had a chair in the artist's studio so he could sit and watch him paint. Velázquez used a long-handled brush so he could see how his brush strokes looked from a distance away from the canvas.

Our featured work in this lesson has been named Las Meninas. The "meninas" were the young daughters of noblemen's families who waited on the young princess who was called an "infanta". The young girl is serving the princess something in a cup. The artist with the brush in his hand is, of course, Velázquez. His special clothing shows he is a knight. If you look at the reflection in the mirror, you can see the king and queen who are apparently posing while the artist paints their picture.

Las Meninas really has two subjects. One is the subject the artist is painting and then we also see the main characters in the room.

He painted several pictures of dwarfs such as the figures you see at the right of the picture. These were the court jesters who entertained the king and his family.

Velázquez also was in charge of buying things for the royal family. He bought art work and furniture. He was in charge of planning and decorating for social events. He helped the king keep the household running smoothly. The king was so appreciative he made him a Knight of the Order of Santiago. This was a very high honor for a nobleman in Spain.

The Surrender of Breda shows the Dutch commander handing over the keys to the town to Spinola who was the Spanish army general. In Spain the painting was called The Lances. The lances you see sticking up in the background indicate there is a large army gathered there. 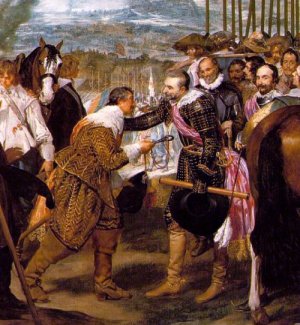 The Surrender of Breda (detail)
Enlarge

Learn more about the painting here

The painting of the young girl who was betrothed as a baby to Prince Leopold is titled The Infant Margarite. 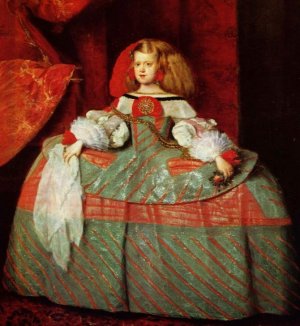 Prince Baltasar Carlos was the son of King Philip IV and heir to the Spanish throne. 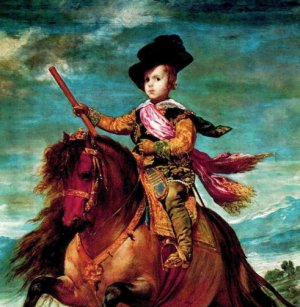 Velázquez painted religious scenes in his early career and painted this scene of Christ Crucified. The words at the top of the cross are written in Greek, Latin and Hebrew and mean "This is Jesus, the King of the Jews". John 19. 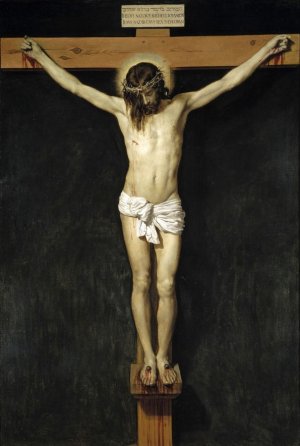 The picture of Old Woman Poaching Eggs was of a type known as a "bodegón" which is Spanish for "pantry" or "tavern". They were usually still-life pictures in a kitchen setting. 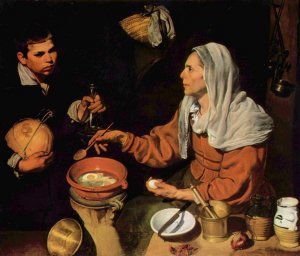 The third painting is of Aesop, the Greek slave who wrote the fables back in 600 B.C. It is said that Aesop spoke up on behalf of the "ugly" and of the "deformed", demanding respect for them. Velázquez also honored the dwarfs by painting them and including them in his pictures. 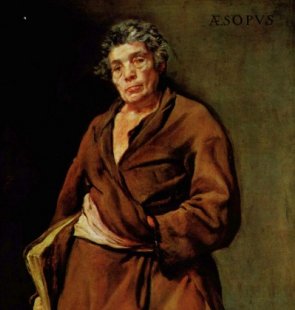 In 1660 the king's daughter married King Louis XIV of France. Velázquez made a trip to northern Spain to make preparations for the marriage of Maria Teresa and the king of France. The artist became ill and died a few days after returning to the royal palace. He was 61 years old. 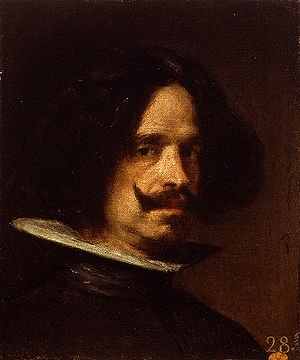 Other Activities
View a slideshow about Diego Velázquez

Information about Velázquez
at Humanities Web

Diego Velázquez and His Times
by Carl Justi 1889 (full view)

The Vexations of Art: Velázquez and Others
by Svetlana Alpers (selected pages)