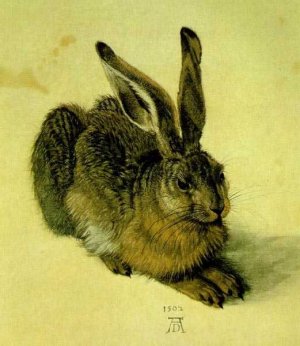 Albrecht Durer (DYOO rer) was born in Nuremberg, Germany. We know little about his early life except the fact that he was the son of a leading goldsmith in Nurembert. He was one of seventeen children born in the family, but only three of them lived to grow up; Albrecht and his brothers Andreas and Hans. His father was a good man who cared about the education of his children and taught them daily that "we should love God and deal truly with our neighbors". The elder Durer was disappointed when his son became more interested in painting than in following the goldsmith trade.

Also ten letters survive that he wrote to his friend Willibald Pirckheimer. They remained lost for 200 years until they were discovered hidden in a wall.

He made a thousand drawings and watercolors and is considered to be the greatest printmaker of all time. He liked making prints because he could make many reproductions of the same picture, and it was a lucrative business. He made a good profit from it. He made over 350 engravings and woodcuts. Connecticut College presents a large collection of Durer woodcuts. Sixty of his oil paintings remain. Frequently he signed and dated his works with his trademark signature

A "self-portrait" is a drawing or painting an artist makes of himself or herself. In 1450, thirty-four years before Durer started making self-portraits Jean Fouquet created a small picture of himself in gold on black enamel. However self-portraits date back to 1365 B.C. in ancient Egypt. We will examine four of Durer's self-portraits.

The first drawing he made of himself was done in 1484 when he was thirteen years old. He used a looking-glass and drew his likeness. He said, "I drew it when I was still a child." 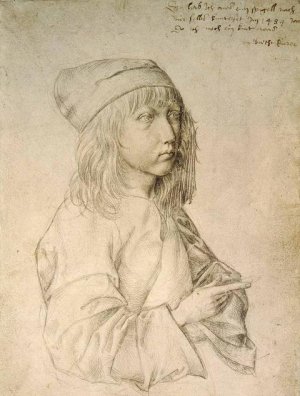 The first painted self-portrait was done when he was twenty-two years old. He married Agnes Frey in 1494 during this time of his life. They didn't have much money so they lived with his father. 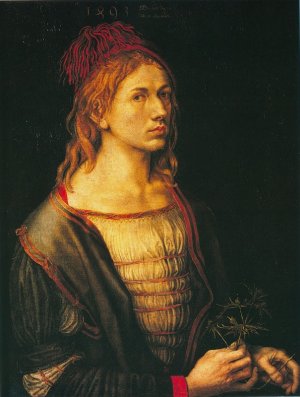 When he was twenty-six he painted a portrait of himself as a young man dressed in elegant clothes. His friend said the painting was so realistic that Durer's dog barked and wagged his tail when he saw it. 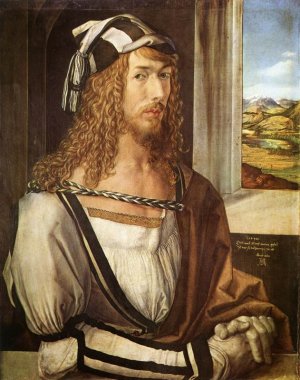 The next portrait was painted when he was twenty-eight years old. It may have been inspired by something he wrote in his own notes, "the more we know, the more we resemble the likeness of Christ who truly knows all things". 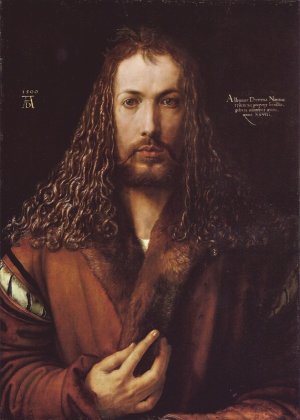 In 1494 he visited Venice. When he was in the Alps he made watercolor drawings as he rode along in the carriage, capturing the view he saw from the widow. He would make other trips to Italy at a later date.

The featured work on this page is A Young Hare which was done in watercolor in 1502. The hare looks very realistic

Today if you go to Nuremberg you can visit the four-story Durer House and observe museum workers reproducing some of Durer's woodblock prints.

Albrecht Durer
from the Artchive

Paintings by Durer
at Olga's Gallery

A story of the "Praying Hands" by Durer

50 Artists You Should Know
by Thomas Koster, Lars Roper (review, no preview) Order

The engravings of Albrecht Durer
by (selected pages)