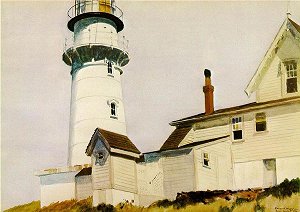 Edward Hopper was born in Nyack, New York. His father owned a dry goods store and he worked there when he was growing up.

He wanted to be an artist from the time he was young. His parents, fearing he could not make a decent living with his painting, encouraged him to become a commercial artist.

He studied at the New York School of Art for seven years. Then he worked as a commercial artist for many years until he was nearly forty years old.

He had an art studio in New York. He lived and painted in the same studio for 50 years.

In 1924 he married Josephine Nivison. She, also an artist, was forty years old. He was forty-two. He bought another studio in the same building for her to have a place to work. Theirs was a stormy marriage. She felt that he did not support her as an artist, and he thought she paid too much attention to her cat and not enough attention to him. But they relied on each other.

In 1927 he and Jo bought a two-year-old Dodge car. It was just one more thing to fight about. He was not a good driver, but he didn't want her to learn how to drive. When she finally did get a driver's license, he didn't want her to drive the car. They were not the most compatible couple.

Hopper made three trips to Paris in his lifetime and made trips in the United States to Colorado and New Mexico. His art reflects mainly his life in America.

Sometimes he would ride the elevated railway and peer down into the houses and offices they were passing. One such trip inspired Office at Night. (Take a closer look at the interactive graphic on that page to learn more about the painting.) He painted scenes of ordinary things you would see in the city and the country; bus stations, office buildings, restaurants, lighthouses etc.

He used Jo his wife as his model in several of his paintings. People in his paintings appear lonely and absorbed in their own thoughts. Usually they are overshadowed by their surroundings as in Nighthawks, which was painted in 1942. It was bought by the Art Institute of Chicago and because of it, he at last became a recognized artist. In the following years he received many awards and medals for his work.. 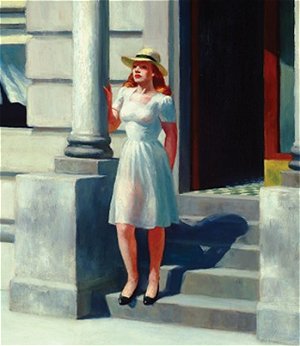 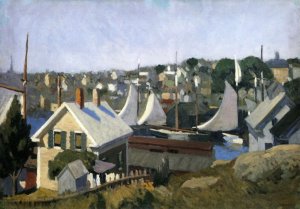 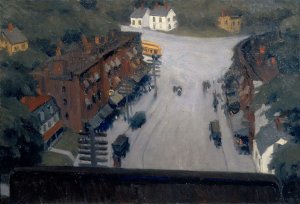 He and Jo had a vacation home in Cape Cod which also had a studio. Many of his paintings were done in this area including Corn Hill (Truro, Cape Cod) . Other works of Edward Hopper include Early Sunday Morning, Drugstore, and House by the Railroad

"Smash The Hun", shown below, was the title of the poster which appeared on the front cover of the February 1919 edition of The Dry Dock Dial, a publication for the New York's Morse Dry Dock and Repair Company. Hopper worked for them as an illustrator and won acclaim for this illustration. The self-portrait shown here was painted in 1903 when he was 21 years old. 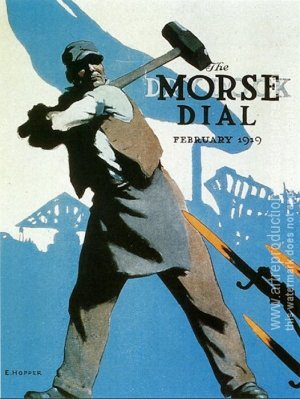 He died in 1967 at the age of 85. He wanted his works to go to the Whitney Museum of American Art. There were more than 3000 paintings, drawings, watercolors, and prints. Jo honored his wishes and also sent her works along with his, as well as the diaries she had meticulously kept for years documenting his life and work. Jo died just ten months later. They were married 43 years. 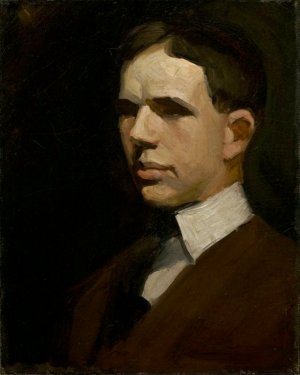 One of his lighthouse paintings was used on a postage stamp in 1970 to commemorate the 150th anniversary of Maine's statehood. You will enjoy reading the history of The Two Lights of Cape Elizabeth. 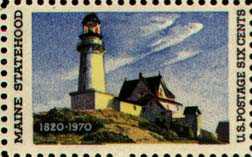 Edward Hopper
from the Artchive