CHARLES I OF ENGLAND 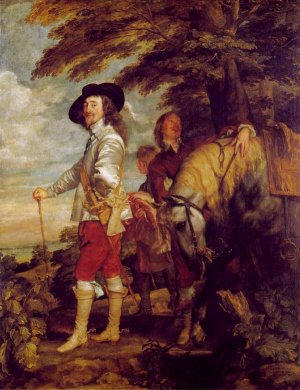 Anthony van Dyck (van DIKE) was a renowned Flemish painter born in Antwerp, which was a main port in the Netherlands. His father was a wealthy businessman who bought and sold beautiful fabrics such as silk, satin, and velvet.

He was named after his grandfather, Antoon Van Dyck the Elder who was an artist in Antwerp. He was the seventh of twelve children in the family. His mother Maria died three weeks after Anthony's seventh birthday.

At age eleven he was apprenticed to an artist, Hendrik van Balen. He was an art prodigy and by age nineteen was teaching art. Later he began working with Peter Paul Rubens who became like a second father to him. In a couple of years he had advanced to the position of Ruben's assistant. Van Dyck became so skilled, it was sometimes hard to tell whether a painting had been done by him, or by his master, Rubens.

The story is told that once when Rubens was out of his studio riding his horse after a day's work, his pupils wanted to see what their master had been painting. Anthony, as his assistant, had a key and let them in, but someone brushed against the painting and messed it up. Van Dyck repaired it, but when Rubens returned he noticed it had been changed. He received a confession from the culprit, but was so pleased with the restoration he didn't pursue it any further.

When he was studying in Italy he began painting full-length portraits of aristocratic families and men on horses.

King Charles I (the First) heard about him and how well he painted. He called him back to England. In 1632 he became the chief painter for the king. He painted numerous works for him. King Charles was well pleased with his work. At one time the artist was waiting payment from the king for 23 pictures, which included twelve portraits of the Queen and five of the King. 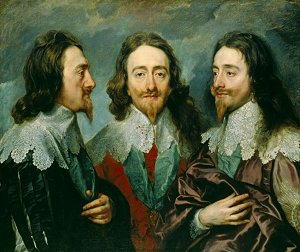 In the painting of the king's children we see the Prince of Wales (afterwards King Charles II) stroking the dog, the Princess Mary (afterwards the wife of William II), and the Duke of York (afterwards King James II). The youngest is about two years old. There are pretty roses in the background. 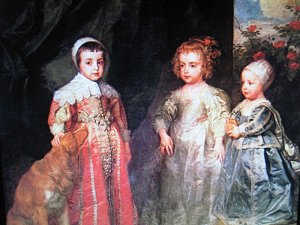 When Charles married Princess Henrietta of France she was only fifteen years old. She was a Catholic and was allowed to practice her religion. The couple had six children. 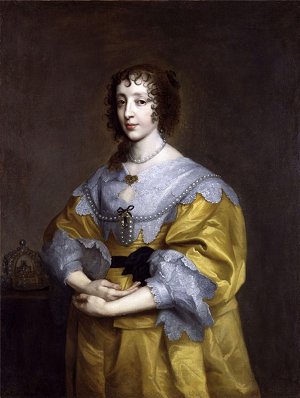 When van Dyck was thirty-two years old the king gave him a pension, a place to live, and knighted him. He became Sir Anthony Van Dyck. His output was prodigious, but always of the highest quality. He lived an extravagant lifestyle. His income was enormous, but he spent money freely. It was at the king's suggestion he married Mary Ruthven, who was related to the royal family.

Toward the end of his life he began craving more and more money. He hired many assistants who prepared the canvases and started the pictures for him. Then he would finish the portraits. When someone was posing for him he would only work for one hour at a time, then schedule an appointment for another day. His serving-man would come in, clean his brushes, and prepare a fresh palette as van Dyck met the person who had the next appointment. In this way he could work on several portraits in a day. At the end of the day he would invite his clients to have a sumptous meal with him. One writer said van Dyck would study their faces during the meal and retouch the portraits in the afternoon.

Many of his portraits can be found in Windsor Castle and Buckingham Palace.

This portrait which is in Buckingham Palace shows Charles I with Queen Henrietta Maria with Charles, Prince of Wales and Princess Mary. It was painted in 1632. Three years later this painting of the Children of Charles I is in Windsor Castle in England. The children's pets are also featured in the work. Also at Windsor Castle is the portrait of the Prince of Wales, Future Charles II, King of England painted by van Dyck in 1637.

He also painted several pictures depicting scenes from the Bible. The first picture is a scene from the Garden of Gethsemane when Judas betrayed Jesus identifying him with a kiss. Matthew 26. 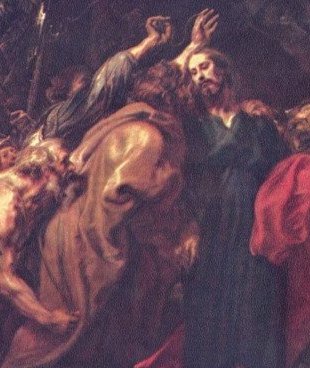 The Kiss of Judas
Enlarge

The second picture shows Jesus at the hands of his tormentors as a crown of thorns is about to be placed on his head. Matthew 27. 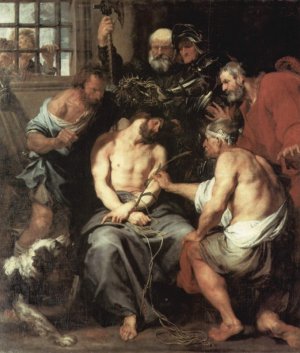 The Crown of Thorns
Enlarge

The third picture is about the events which occurred on the Day of Pentecost 50 days after Jesus' resurrection. Acts 2. 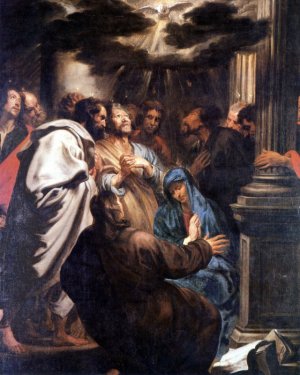 The Descent of the Holy Spirit
Enlarge

He painted very little the last two years of his life, but spent the time traveling with his young bride. In 1641 his health began to fail. His wife gave birth to their daughter on December 1 and van Dyck died eight days later on December 9 and was buried in St. Paul's Cathedral in London. He left a considerable fortune which was divided between his widow and his nearest relatives. King Charles II later gave van Dyck's daughter Justiniana 200 pounds a year as compensation for money his father still owed van Dyck. 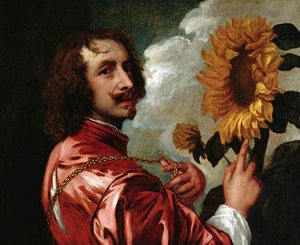 Anthony van Dyck
biography and images from the Artchive

Biography: Anthony van Dyck
from the National Gallery of Art

Catalogue of Works of Most Eminent Dutch, French, and Flemish Painters
by John Smith 1842 (full view)

Anthony van Dyck
by Thomas Howard, the Earl of Arundel (Review no preview)