GEORGE CLIVE AND HIS FAMILY 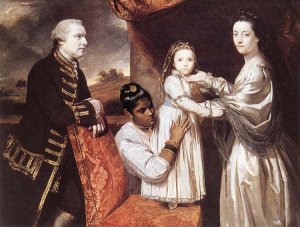 Joshua Reynolds (RIN ulz) was born in Plympton, Devonshire in England. His father, who was the headmaster of the grammar school in his town, was his teacher.

When he was twelve he painted a portrait on sailcloth working with the paint they used in the shipyard. It was not a great painting, but it did demonstrate his talent, and his father allowed him to become an apprentice to an artist.

He studied with Thomas Hudson in London and became a better artist than his teacher. Hudson became jealous and dismissed him as his pupil.

Reynolds studied the works of different artists in Italy for three years and became one of the best portrait painters of his time. After spending time in Italy he began to incorporate the Italian style in his painting, sometimes putting his subjects dressed in flowing robes in Italian settings with columns and statues.

He wanted his subjects dressed in elegant clothing. Velvet and lace lended majesty to a painting. He was very particular about this and once had the Duchess of Rutledge try on eleven dresses before he found the right one for the painting.

He knew historical pictures didn't sell well, but people did like to have pictures of themselves; portraits. By the time he was 32 years old he had painted 100 portraits for people.

The painting featured in this lesson George Clive and His Family was painted in 1765. Clive was an elected member of the British Parliament serving for 16 years. He and his wife Syndey had several children including Edward.

He painted people just as he saw them. We see Giuseppe Baretti holding the book close to his face to read. In 1775 he painted a portrait of himself holding an ear-trumpet and another of Dr. Johnson a stately old man holding a book near his eyes and the good doctor retorted, "Reynolds may paint himself as deaf as he chooses, but I will not be Blinking Sam. 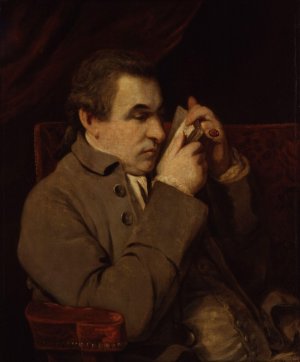 His chief work in 1783 was his painting of Mrs. Siddons as "The Tragic Muse". Mrs. Siddons was a dramatic actress playing the part of tragic heroines of Shakespeare. She was highly respected and much loved. When Reynolds asked her to sit down, she assumed the pose you see in the painting and that's the way he portrayed her. She wouldn't let him retouch and rework her face in the portrait. When he completed the painting he signed his name on the hem of the dress saying, "I could not lose the honor of this opportunity afforded me of going down to posterity on the hem of your garment". The two figures in the background represent Pity and Remorse. 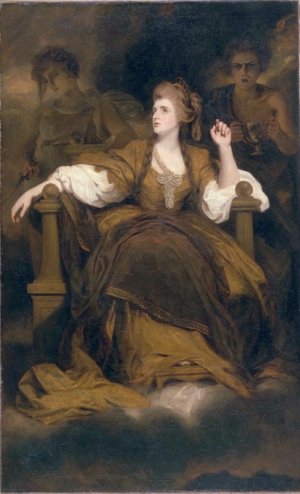 John Russell was the 4th Duke of Bedford. He was a British statesman and held many public offices. All three of his sons died before he did, but he was succeeded by his grandson. 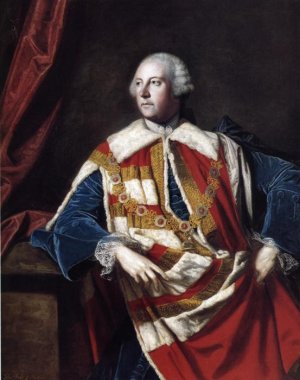 The 4th Duke of Bedford
Enlarge

Thomas Gainsborough was another portrait artist in England. Both became famous, but Reynolds profited more from his work than Gainsborough.

Reynolds was knighted by King George III (the Third) in 1768 and he became Sir Joshua Reynolds. Later he was made "painter to the king".

He loved painting fair women and beautiful children. In 1787 there was an exhibit that contained thirteen pictures and nine of them were of women and their children. The painting of Miss Cocks and Her Niece was possibly the last painting Reynolds did before he became blind. Margaret Cocks is shown with her niece Mary, the six-year-old daughter of Margaret's late sister. 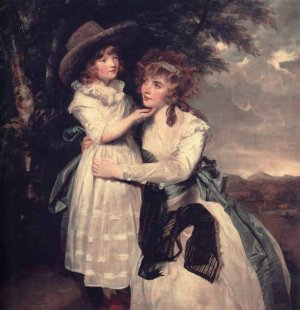 Miss Cocks and Her Niece
Enlarge 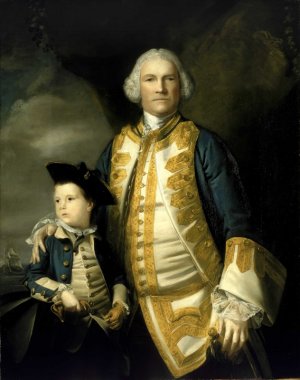 Francis Holburne with His Son
Enlarge

Lady Cockburn's name was Anne Augusta. The children shown with her are all of age four and under, and Reynolds had several sittings with the children as he made the painting. The oldest child, on her right, is James. George is peeping over her shoulder and William is the baby on her lap. She later had two more sons and a daughter whom she named Augusta. The large red macaw was a family pet which belonged to the Reynolds household. 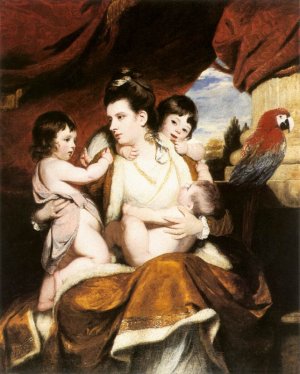 When he was 68 years old a tumor began growing over his left eye and the other eye became inflamed as well. He proceeded to write his will because he knew he didn't have much longer to see.After he went blind he became depressed and would not eat well. He knew his days as an artist were at an end. Two years later when he died he was buried in the crypt of St. Paul's Cathedral in London. 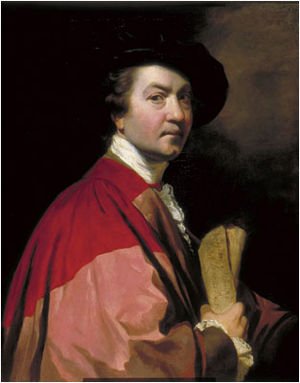 Joshua Reynolds
at Art Renewal Center
(You must register to see the paintings.)

Paintings by Reynolds
over 200 works at Olga's Gallery