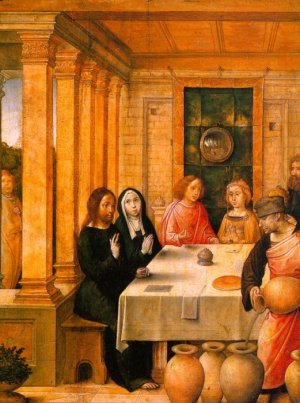 Juan de Flandes (WAHN de FLANDS) was born in the Netherlands sometime around 1465. He lived in Spain during the years when he was an artist.

In 1498 Queen Isabella of Spain hired him as the official artist for the court.

This painting was done in oil, and was painted in 1500 on wood. It now hangs in the Metropolitan Museum of Art in New York.

In this story, Jesus and his mother, Mary, are attending a wedding feast. The host ran out of wine and Jesus asked that water jars be brought in and filled with water. When they began to pour from the jars, the water had been turned into wine; the finest wine they had served at the feast.

This was the first of many miracles that Jesus performed while he was on earth.

The bride and the groom are facing us in the picture, and Jesus and his mother are both robed in black.

Another religious painting by de Flandes illustrates the Resurrection of Lazarus. Jesus was a good friend of Lazarus and his sisters Mary and Martha. The Jewish leaders (possibly the men looking through the gate) were the enemies of Christ and plotted to kill Lazarus after this event. Painted in the 1500's, this is one of four panels in an altarpiece at the Church of San Lazaro in Palencia, Spain.

He painted an altarpiece for Queen Isabella which originally had 47 panels. (Follow the link and click on the words "Polyptych of Isabella the Catholic" to view some of the panels.) "The Marriage Feast at Cana" and a different painting of Lazarus than the one described above are a part of the altarpiece. The panels were small enough to be portable. Through the years they became separated and only about half of them survive as a group. 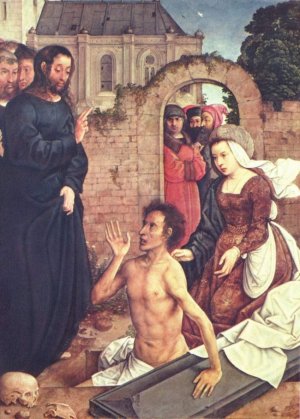 The Raising of Lazarus
Enlarge

The story of the Marriage Feast at Cana can be found at John 2:1-11

Books
Press "Go" to search for books about Famous Artists.
Credits and Solutions
Puzzles on these pages courtesy of
Songs of Praise and Armored Penguin