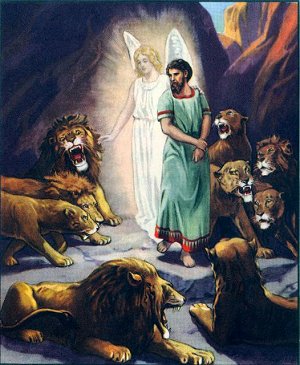 King Belshazzar made a great feast for 1,000 people. He commanded that some special cups be brought in for them to drink from. These cups had been stolen from the temple of God in Jerusalem by the king's father. It was not right for them to be drinking from them and praising idols while they drank. God was very displeased with him 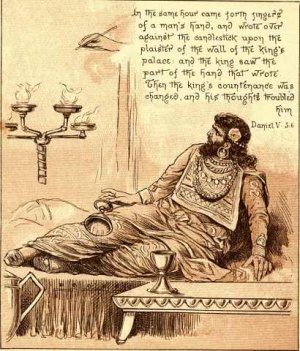 Daniel did tell him what the words meant. He said, "God is not pleased with you because you have not been humble. You have drunk out of the vessels of the temple, and you have praised idols. You have been weighed in the balances and found wanting. Your kingdom will be divided and you will be killed."

Darius was the the next king, and he liked Daniel very much. There were some bad men in the kingdom who did not like Daniel. They looked for a way to destroy him. They tricked the king into making a law. The law said that no one could pray to anyone but Darius for 30 days. Anyone who prayed to God would be thrown into the lions' den. But Daniel still prayed to God. The bad men told the king. So, the king had to put Daniel in the lions' den.

God protected Daniel. The next morning the king found Daniel alive. God had closed the mouths of the lions! Then the happy king and all his people believed in God.

Read the story in Spanish Daniel

What does this story
mean to me?
Daniel was not afraid to pray in public. And his life was even in danger when he was seen praying.

What about you? Do you hesitate to offer a prayer of thanks when you eat in a public place? We set a good example for others when we do have the courage to pray in public.

This story about Daniel can be found in the Bible in Daniel chapter 6.

Memory Verse
My God has sent his angel, and has shut the lions' mouths, that they have not hurt me. Daniel 6:22

Song: God is King of You

Spanish Bible Activities Select story #160 in the list for activities to accompany this Bible story.