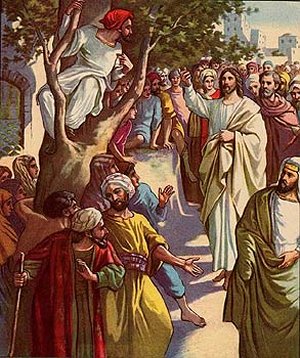 Tax collectors were hated because they sometimes cheated people by collecting more than they should. They gave part of the money to the government and kept the rest for themselves.

When the tax collectors asked John the Baptist what they should do, he told them to not collect more than they were required to.

Many times in the Bible they are grouped with sinners, pagans, and immoral people. However, Jesus portrayed many of them as teachable and ready to repent. The parable of the Pharisee and the tax collector shows the contrast in their attitudes. The Pharisee was proud of his goodness, but the tax collector was humble and asked for forgiveness. You can read this parable in Luke 18:10-14.

Zacchaeus was such a man. He wanted to see Jesus, but he was not very tall. All his life he had trouble seeing over the heads and shoulders of people in crowds. He had an idea. He would run ahead of the crowd and climb up in the sycamore fig tree that was beside the path where Jesus would walk.

His short legs carried him to the spot, and he climbed the tree. What an excellent place! We could say he had a "front row seat".

When Jesus got to the tree, he looked up at Zacchaeus. He told him to come down, immediately. He wanted to go to Zacchaeus' house! Zacchaeus was so excited. He climbed down and welcomed Jesus.

People began to criticize Jesus because he was going to the house of a "sinner", but Zacchaeus was a repentant sinner. He was sorry for the bad things he had done. He told the Lord that he would give half of his possessions to the poor, and if he had cheated anybody out of anything, he would give back four times that amount.

Jesus was pleased with this little man's excellent attitude of heart. He said, "Today salvation has come to this house."

Read the story in Spanish Zaqueo

What does this story
mean to me?
Zacchaeus was a little man with a big problem. He wanted to see Jesus, but because he was so short, he couldn't see over the people in front of him. But he didn't just give up and go home. No, he looked for a way to solve his problem.

When you face a problem, don't be quick to give up. Try to think of all the ways you can solve that problem. Some of your ideas might not work at all, but keep trying to find one that will work.

You can read about Zacchaeus in the Bible in
Luke 19:1-10

Memory Verse
The Son of Man has come to seek and save that which was lost. Luke 19:10 (NKJV)
Take the online test

Spanish Bible Activities Select story #216 in the list for activities to accompany this Bible story.