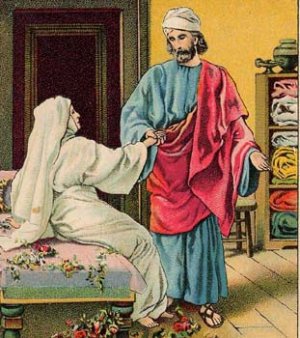 Dorcas, a word which means "gazelle", was sometimes called Tabitha. She was a very kind person who spent her time caring for the widows of Joppa.

God has always been mindful of the widows and people who are poor. In Bible times, when a woman's husband died, she had no way to make a living. (This condition even still exists in some parts of the world today.)

The law in those times stated that if a widow's husband had owned land, it went to the oldest son, and if the son didn't take care of his mother, she had nowhere to turn for help. If there was no son, she still lost her property and could only get it back if a relative of her husband married her. You will remember the story of Ruth and Boaz.

God had instructed the Jews to care for the poor. They could not harvest the edges of their fields, but had to leave the grain for the poor people to "glean" or pick up. Neither could the owner go over the field a second time to pick up grain that had fallen. It was to be left for the poor.

Every third year the tithe, or one tenth of the crop, was given to the poor, and every seventh year all debts were canceled so that people could get a fresh start and begin again free of the debt of owing money.

In the New Testament, James writes that one of the marks of pure religion is that a person will take care of the widows and orphans. Those who care for the poor receive God's approval, and those who do not are displeasing to him.

Dorcas lived in Joppa, a seaport town. (See picture below.) She was a loving person who showed kindness to others and especially to the poor. She made coats for the widows so they would have something to keep them warm in the winter.

The seaport city of Joppa
Enlarge

One day she became ill and died. Her friends were so sad and upset. Their dear friend was gone.

They had heard that Peter had been performing miracles of healing sick people. At this time no apostle had raised anyone from the dead, but Dorcas' friends believed that Peter could do even that, so they sent two men to Lydda, a nearby town where Peter was staying.

Peter went back to Joppa with the men, and when he got there, he was led to an upper room where her friends had laid Dorcas. The room was filled with widows who were crying and showing one another the coats and other clothing which Dorcas had made for them while she was alive. Each stitch showed her faithfulness and the love she had for them.

Peter told them all to leave the room, then he got down on his knees and prayed, asking God to bring life back into her still body. He said to her, "Tabitha, get up."

She opened her eyes and when she saw Peter, she sat up. He took her by the hand and she stood up.

He called for the people to come back into the room, and there they saw their friend, alive again. What joy they felt!

The news spread quickly through the town of Joppa. Dorcas is alive again! Because of the miracle many people believed in the Lord.

What does this story
mean to me?
If you have a house in which to live, clothes to wear, and food for every meal, you are rich compared to many people in the world. If we have these things and we have more than enough, we need to share with those who are less fortunate.

We need to look for ways to help the poor, especially those families who have lost the husband and father of the family. There are many ways to do this.

You may personally know someone who has needs, and you can share with them.

There are organizations and homes for orphans that need our help. Sometimes churches ask for food or other items for orphans' homes. You can go with your family to the store to buy these things for them.

Be willing to share. You will feel good and others will benefit.

Memory Verse
He who is kind to the poor lends to the Lord, and he will reward him for what he has done. Proverbs 19:17 (NIV)
Take the online test

Spanish Bible Activities Select story #253 in the list for activities to accompany this Bible story.