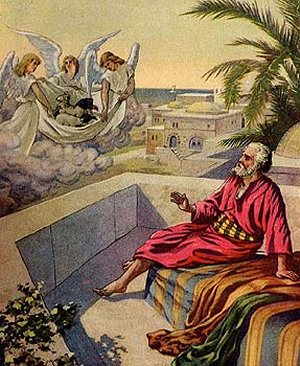 Cornelius (cor NEE lee us) was a Roman soldier in the city of Caesarea (ses uh REE uh). He was an officer in charge of 100 soldiers; a centurion (sin TOOR ee un). He and all his family feared God, helped the poor, and prayed to God regularly.

One day about 3:00 in the afternoon he had a vision. Sometimes God communicated with people in this way. Cornelius saw an angel who called him by name. "Cornelius!" the angel said.

Cornelius was frightened and recognized that the vision was from God. "What is it, Lord?" he asked.

The angel said that God knew about the kind things Cornelius had done for the poor and that his prayers had been heard.

He was told to send men to the city of Joppa and bring back a man named Peter who was staying with Simon the tanner in Simon's house by the sea.

When the angel was gone, Cornelius called two of his servants and one of his soldiers, whom he trusted, to go to Joppa and find Peter. The town was about thirty miles away from Caesarea.

Before we go any further with our story, we need to mention something about the Jews and the Gentiles (JEN tielz). If a person was not a Jew, he/she was a "Gentile", and the Jews hated the Gentiles because they were not a part of "God's chosen people". They would not associate with them and would have no dealings with them.

In our story, we have Cornelius, a Gentile, sending a message to Peter, a Jew, asking him to come to his house. What will be Peter's reaction? He is not supposed to have anything to do with this "unclean" person.

About noon the next day the three men approached the city of Joppa. Peter had become hungry, and while the meal was being prepared, he was up on the rooftop praying. The roofs in that area were flat roofs. In warm weather the family might sleep up on the roof. The law of Moses stated that when people built a house, they had to put a wall around the edge of the roof so they would not be responsible for an injury if someone fell off the roof. (Deuteronomy 22:8) The wall was usually about four feet high.

Peter fell into a trance, a dreamlike state, and he saw heaven opened and a huge sheet being let down by its four corners. In the sheet were all kinds of four-footed animals, birds, and reptiles.

A voice told him, "Get up Peter. Kill and eat."

The classes of animals are described in detail in Leviticus chapter 11. The unclean animals included the camel, badger, rabbit, lizard and pig. They could eat no pork such as ham or bacon. Fish that had no scales nor fins, such as the catfish, were unclean. Certain birds, mainly scavengers and birds of prey, were unclean; the eagle, hawk, vulture, owl, gull, stork and the bat.

What was Peter to do? He could not eat an unclean animal, yet the voice had said, "Kill and eat."

Peter answered, "Surely not, Lord! I have never eaten anything common (impure) or unclean".

The voice spoke a second time and told him that God had made them clean, and Peter was not to call them unclean.

Three times the voice told him to "Kill and eat', then the sheet was suddenly taken back to heaven.

While Peter was puzzling over what the vision could mean, the three men sent by Cornelius arrived, stopped at the gate, and asked if Simon Peter was staying there.

The stage is set and everything is ready. The Spirit of the Lord told Peter that three men were looking for him, and that he was to go downstairs and go with them. The Spirit said that He had sent the men to him.

Peter went downstairs and told them he was the person for whom they were looking.

"Why have you come?" he asked.

Now Peter understood that no longer should he consider the Gentiles "unclean", because God had accepted them, and that he, Peter, would be the one to tell them the good news about Jesus.

Read the next story to find out what happened when Peter went to Caesarea with the men.

What does this story
mean to me?
Peter knew that going to the house of Cornelius would make him very unpopular with his fellow Jews. They looked down upon the Gentiles and would have nothing to do with them.

Sometimes you may be tempted to shun someone who is different. Your friends may ridicule or avoid that person because he or she looks different or has different ideas.

It takes courage to talk to and become friends with someone your friends do not accept. Their reasons for not accepting that person may be based only on prejudice (prejudging someone before you even know that person).

You can be an accepting friend.

This story about Peter's vision can be found in the Bible in Acts 10:1-23

Memory Verse
The voice spoke to him a second time, "Do not call anything impure that God has made clean." Acts 10:15 (NIV)
Take the online test

Spanish Bible Activities Select story #255 in the list for activities to accompany this Bible story.