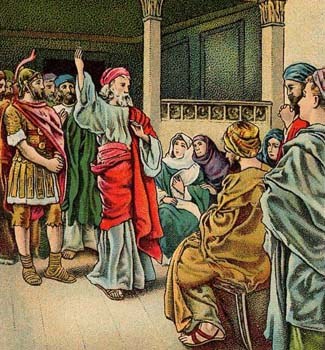 The three men sent by Cornelius spent the night in Joppa, and the next day Peter started out with them to go to see Cornelius.

What would his Jewish brothers think? The law of Moses taught that Jews could not marry Gentiles or participate in any of the heathen worship. And then Jewish tradition had restricted it further by teaching that a Jew could not even visit nor eat with a Gentile.

Peter took six Jewish men with him to serve as witnesses to what was happening. His Jewish brethren would be very upset when they found out he had gone to the house of a Gentile.

In Caesarea, Cornelius had called together his family and his close friends, and they were all assembled in his house to wait for the arrival of Peter.

When Peter came into the house, Cornelius fell down at his feet to worship him, but Peter told him to get up. "Stand up," he said, "I am only a man myself." God did not want people to worship men or angels.

When they went inside, Peter saw that a large group of people had gathered. He told them it was against Jewish law for Jews to associate with Gentiles. According to the law, he Peter, should not even be visiting with them, but God had shown him that he should not call any man unclean. (Remember the vision on the roof.)

Cornelius told him about the vision he had seen while he was praying, and how the man in shining clothes had told him to send for Peter.

Cornelius said, "We are all here in the presence of God to listen to everything the Lord has commanded you to tell us." Their hearts were ready and open to receive the message.

Peter began to tell them about Jesus, how he came and lived among them, was crucified, and how that God had raised him from the dead. Jesus had been seen by certain people after he was alive again. Peter said that everyone who believes in Jesus receives forgiveness of sin through His name.

Then a remarkable thing happened! While Peter was still talking, the Holy Spirit came on those who were listening, and they began to speak in other languages (tongues) just as the apostles had done on the day of Pentecost.

The six men who had come with Peter were amazed. Here were Gentiles being blessed by God just as the Jews had been blessed!

Peter said, "Can anyone keep these people from being baptized with water? They have received the Holy Spirit just as we have."

He ordered them to be baptized in the name of Jesus Christ. Then they asked Peter to stay with them a few days. No longer is Peter in the house of an "unclean" Gentile, but a Christian brother.

Sure enough, the Jews were very upset when they heard that Peter had visited in the house of a Gentile, but he told them the whole story, and he had the six Jewish brethren to vouch for him.

The Jews were convinced that the Gentiles had indeed been accepted, and they praised God for it.

Read the story in Spanish Cornelio

What does this story
mean to me?
Did you notice the words of Cornelius: "We are here in the presence of God to listen to everything the Lord has commanded you to tell us"? Cornelius had a good attitude.

Attitude is so important. Are you willing to listen to your parents? Parents have the responsibility of training their children and teaching them how to please God. If you resist their efforts, you cause grief to them and also to God.

You can bring harmony and happiness to your home by developing a good attitude.

Memory Verse
Now we are all here in the presence of God to listen to everything the Lord has commanded you to tell us. Acts 10:33 (NIV)
Take the online test

Spanish Bible Activities Select story #254 in the list for activities to accompany this Bible story.


Books
Press "Go" to search for The God Puzzle.
Credits and Solutions
Puzzles on these pages courtesy of
Songs of Praise and Armored Penguin