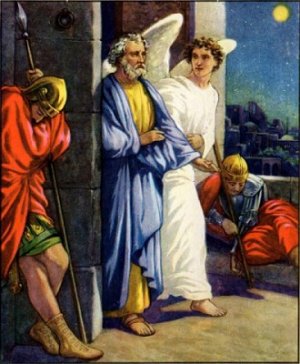 King Herod was a wicked ruler. He was persecuting the Christians and even had the apostle James, John's brother, put to death. When he saw that the Jews were pleased about it, he had Peter arrested and put in prison.

He wanted to make sure Peter didn't escape, so he put guards in the prison to guard him. There were four rotating shifts of four guards each. It would seem there would be no way for Peter to leave the prison. Surely he would be put on trial the next day.

The church during this time was praying that God would take care of Peter. They wanted him to be back with them again.

Peter was asleep in the prison. There were chains on each of his wrists, and there was a guard on each side of him and more guards at the doorway.

However, nothing is too hard for God. Suddenly there was a bright light inside the prison, and an angel appeared. The angel struck Peter on the side to wake him and his chains fell off.

Peter obeyed though he didn't think it was really happening. He thought it was just a vision

They passed by the first guard, then the second guard, and the guards didn't even see them. Were they asleep, or were they just blind to what was happening?

There was still one more barrier to his freedom. The iron gate that led to the city was in front of them, and then without anyone pushing on it, the gate swung open by itself.

They walked through the gate and went the length of one street. Then as suddenly as he had appeared, the angel left him.

Peter stood in the quiet stillness of the dark street. It dawned on him what had just happened. It wasn't a vision. It had really happened! God had delivered him from Herod and the terrible fate that the king had planned for him.

He must hurry to find his friends. He went to the home of Mary, John Mark's mother, where the church was gathered praying for him. He knocked at the outer entrance.

A servant girl named Rhoda went to answer the door. Peter spoke and Rhoda recognized his voice. She was so excited she didn't even open the door. She ran back to the others and said, "Peter is at the door!"

They thought she was out of her mind. How could it be Peter? Peter was in prison. "It must be his angel," they said. The Jews believed that everyone had a guardian angel, and this angel must be speaking with Peter's voice.

Peter kept on knocking. Finally they opened the door and they were so surprised to see Peter standing there. Did they not believe that God could answer their prayers for Peter's release?

Everyone started talking at one time. Peter held up his hand for them to be quiet, then he told them how God had sent an angel to deliver him.

He instructed them to tell James and the others about his release. This was probably James, the brother of Jesus since James, the apostle had already been killed by Herod. Peter left to go to another place.

What happened at the prison the next morning? They looked and looked for Peter and couldn't find him. The guards had been responsible for keeping him in prison, and if they failed in their duty, the penalty was death. Herod ordered that the four guards be executed.

As for Herod, not many days later Herod appeared on his throne and gave a speech. The people said, "This is the voice of a god, not of a man." Herod accepted their praise and did not give praise to God. Immediately an angel of the Lord struck him down, and he was eaten by worms and died.

What does this story
mean to me?
It would seem that Peter was in a situation where escape would be impossible. He was in chains, and guards were everywhere. But with God all things are possible.

You may be in a situation where escape seems impossible. Pray to God about it. Ask him to give you wisdom and show you the way of escape.

Find an adult that you can trust and seek counsel from that person. It may be someone very close to you in your family. It may be a teacher, a minister, a school nurse, or a counselor.

Memory Verse
When you pray, go into your room, close the door and pray to your Father, who is unseen. Then your Father, who sees what is done in secret, will reward you. Matthew 6:6 (NIV)
Take the online test

Spanish Bible Activities Select story #257 in the list for activities to accompany this Bible story.


Books
Press "Go" to search for A Book of Angels: Stories of Angels in the Bible.
Credits and Solutions
Graphic courtesy of The Bread Site public domain clipart collection