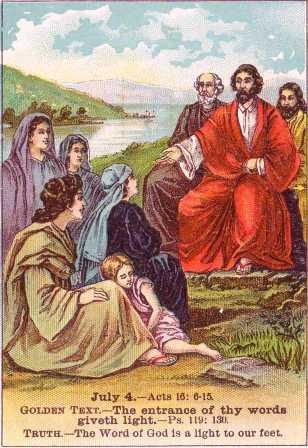 As they traveled, the Holy Spirit would guide them and tell them where to go next. One night while they were at Troas (TRO az), Paul had a vision. A man from Macedonia (mass uh DOAN ee uh) was begging him to come over to Macedonia to help them. The Spirit was guiding them again.

Immediately they got ready and left. It was a long trip by ship from Troas to Macedonia. They arrived at Philippi (FILL uh pie), which was a Roman colony and one of the largest cities in Macedonia.

They stayed several days. Then they heard that a group of people met by the river to worship on the Sabbath day, so they went outside the city gate to the meeting place.

They sat down and began to speak to the women who were gathered there to pray. One of them was a woman named Lydia who was from the city of Thyatira (thigh uh TIRE uh), which was in a district east of Macedonia. She was a dealer who sold purple cloth.

Purple cloth was very expensive. The reason it was so costly was that it was difficult to make. The dye for the cloth came from a shellfish. The juice was white while it was in the veins of the fish, but when it was exposed to the sun, the liquid changed into bright purple and red colors. It took a lot of work to catch enough shellfish to dye even one garment.

The beautiful cloth was mainly used by members of the royal families and Roman senators who were required to have a purple band around the edge of their togas, or robes.

As Paul preached, the Lord opened the heart of Lydia to receive the message about Jesus. She believed his words and responded to the teaching. She and the members of her household were baptized.

We don't know if she was married, or single, or a widow. She probably had people working for her in her business since she was a merchant.

She told the men if they considered her a believer in the Lord, she would like for them to come and stay at her house. Evidently she had plenty of room to accommodate the four of them; Paul, Silas, Timothy, and Luke was with them also. She continued to urge them and they accepted her invitation and stayed at her house.

Lydia's heart was like the good soil in the parable of the sower. When she heard the word of God, she received it with joy and obeyed the words of the apostle.

Read the story in Spanish Lidia

What does this story
mean to me?
Lydia is an inspiration to girls and young women even today. She was a "go-getter", a business woman able to manage money and a business.

In addition, she was a religious person, intent on worshiping God. She had a good heart which she opened to the truth.

What about you? Are you lazy, or are you a hard worker? Are you willing to put forth the effort to study and become successful? If you are this kind of person, you will have a happy life, and also you will be a blessing to others.

Books
Press "Go" to search for Undercover Heroes of the Bibles, Ages 4-5
Credits and Solutions
Puzzles on these pages courtesy of
Songs of Praise and Armored Penguin