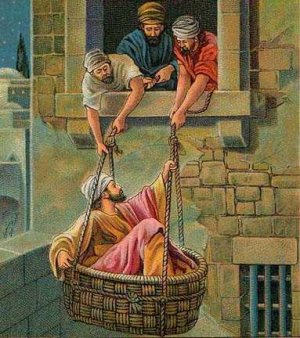 The Christians in Damascus didn't know what to think of him. He began to preach in their city and became more and more powerful.

Some of the Jews decided he was dangerous to them and started looking for a way to kill him, but Paul learned of their plan. His enemies watched the city gate day and night, determined to grab him when he tried to leave the city.

Paul and his friends had other plans, and God wanted Paul to survive to preach in other cities. This was their plan: They got a large basket, big enough to hold a man. They tied ropes onto the basket to lower it to the ground. When it was dark, Paul got into the basket and his friends lowered him down through an opening in the wall. He didn't use the city gates at all! His enemies' plan was foiled and Paul left the city in safety.

He went from Damascus to Jerusalem, but the Christians there feared him also. Barnabas, good Barnabas, stood up for him and told the Christians that Paul really was changed. He was accepted by them and preached, but it became dangerous there also when the Jews from Greece tried to kill him. His friends took him to Caesarea (ses uh REE uh) and then sent him off to Tarsus, his hometown.

What does this story
mean to me?
Paul had some good friends. Friends help one another. You can be such a helpful friend. Your friend's life is probably not in danger, but he or she may need to be encouraged. Friends may need to know that you will be there when others ridicule them or tell lies about them. Be ready to speak a good word and stand up for your friends. Be a loyal friend.

Memory Verse
The Lord is my rock, my fortress and my deliverer. Second Samuel 22:2 NIV
Take the online test

Books
Press "Go" to search for books about The Apostle Paul.
Credits and Solutions
Puzzles on these pages courtesy of
Songs of Praise and Armored Penguin