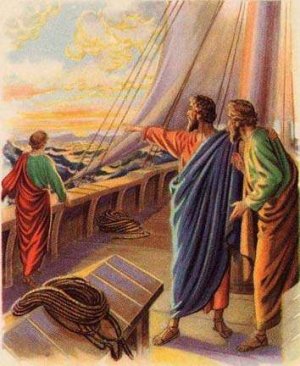 Enlarge
Other pictures 1 and 2

Barnabas and Paul were teachers in the church at Antioch (ANT e ock). One day during a worship service the Holy Spirit revealed His special plans for the two men. The church fasted and prayed and sent them on their way.

They sailed to the island of Cyprus (SIE prus). They crossed over the island and came to the town of Paphos (PAY fus). An interesting thing happened in that town.

There was a false prophet named Bar-Jesus (bar JE zus). He was a sorcerer who practiced magic and tricked the people. His master, a government official named Sergius Paulus (SUR jus PAUL us) wanted to learn from Paul and Barnabas. But Bar-Jesus, also known as Elymas (EL imas), didn't want his master to hear their message. He started speaking against them.

Paul called Elymas the "son of the devil and the enemy of everything that was right". He told him that he was going to become blind and not be able to see the light of the sun. Immediately everything became dark to him. He couldn't see a thing! He started trying to find someone to lead him by the hand.

When the official saw what had happened, he believed the words of Paul and Barnabas. He was amazed at the story of Jesus.

The two preachers continued to travel. There were no cars, trains, or buses. They either walked or rode on animals. They traveled miles and miles, and many people believed their teaching and became followers of Jesus. They suffered countless hardships and persecutions, but they considered these things to be trivial compared to the joy and promised reward of obeying the Lord and following the directions of the Holy Spirit. They no longer lived for themselves, but for God.

What does this story
mean to me?
Elymus opposed Paul and suffered because of it. Jesus said, "He that is not with me is against me".

Maybe we need to think twice before saying unkind things about people who are trying to do good. If they are trying to serve the Lord by helping others, let us refrain from criticizing their efforts. Each one of us has a full time job taking care of our own life.

You can read about Paul's First Missionary Journey in
Acts 13:1-52

Memory Verse
For I know the plans I have for you declares the Lord, plans to prosper you and not to harm you, plans to give you hope and a future. Jeremiah 29:11 NIV
Take the online test

Books
Press "Go" to search for books about The Apostle Paul.
Credits and Solutions
Maps and information about The Travels of Paul by Robert Brenchley