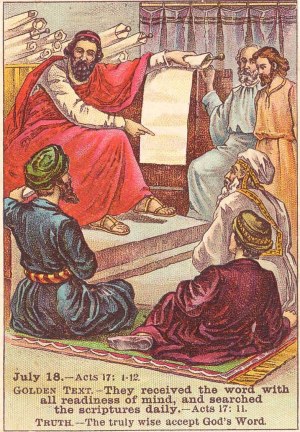 Paul and Barnabas parted company because of a disagreement they had about John Mark. The young man had earlier left their company and returned to Jerusalem. Barnabas wanted to give John Mark, his nephew, another chance, but Paul preferred not to take him on the next trip. So Barnabas and John Mark went one way, and Paul chose Silas to accompany him on a trip in another direction.

Besides Paul and Silas there were two more preachers on the journey; a young Christian named Timothy and Luke, the physician.

They arrived in Thessalonica (thes uh luh NIKE uh) which was a seaport town. Paul preached in the Jewish synagogue for three Sabbaths. Many Jews and Greeks believed his teaching, but his enemies, the Jews who didn't believe, began stirring up trouble again, and Paul and Silas had to leave the city at night under the cover of darkness.

They went to Berea (buh REE uh). The people there listened to Paul, but they also searched the scriptures to be sure what Paul was saying agreed with the scriptures they accepted as the word of God. Of course, the teachings were in perfect harmony because God, who had inspired the scriptures, was also guiding Paul's preaching.

The Bible says the Bereans were more noble than the people in Thessalonica because they wanted to prove that Paul's words were true.

The Jews in Thessalonica came to Berea and started causing trouble for Paul, so the Christians sent him to Athens, but Silas and Timothy stayed in Berea intending to join Paul as soon as possible.

What does this story
mean to me?
Paul and Barnabas had a disagreement. They were able to settle the disagreement without becoming enemies. Do you think they went off and said bad things about each other? We know that at a later time Paul asked for John Mark to join them again in the work. Disagreements can be resolved without causing harm to others.

Sometimes we have to just "agree to disagree", but still remain friends and leave the door open for a reconciliation.

Just because someone doesn't agree with you, does that mean you can't be friends anymore? No, we can work things out in a loving way.

You can read about Paul's Second Missionary Journey in
Acts 17:1-15

Books
Press "Go" to search for books about the Apostle Paul.
Credits and Solutions
Puzzles on these pages courtesy of
Songs of Praise and Armored Penguin