The Riot in Ephesus 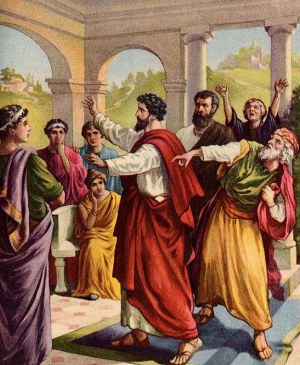 Paul had been preaching in Ephesus the message that there was only one true God and that idols were not gods at all.

Many of the people in Ephesus worshiped the goddess Diana. Her Greek name was Artemis.

There was a silversmith named Demetrius (dih ME tree us) who made silver images of the goddess Diana and sold them to the people. He probably made a lot of money selling these statues. Paul was a threat to his business.

Demetrius stirred up the people against Paul. They began shouting, "Great is Diana of the Ephesians". Over and over they chanted until a great crowd started shouting. Some of them didn't even know why they were shouting. They just did it because everyone else was shouting.

Paul wanted to talk to the crowd, but his friends discouraged him for fear he would get hurt.

The shouting continued for about two hours. It was turning into a riot. Finally the city clerk gained the attention of the people and got them quiet. He said they had no reason to be behaving in such a manner, and that if Demetrius had a problem, he needed to take it to the courts.

The clerk dismissed the crowd and Paul was unharmed.

What does this story
mean to me?
Did you notice that some people in the group who were shouting didn't even know what it was all about? They were just following the crowd.

Sometimes you can get in big trouble by just going along with whatever the crowd is doing. Suppose your "friends" think it would be fun to vandalize someone's property; break some windows or spray some paint on things.

Memory Verse
The God who made the world and everything in it is the Lord of heaven and earth and does not live in temples built by hands. And he is not served by human hands, as if he needed anything, because he himself gives all men life and breath and everything else. Acts 17:24-25 NIV
Take the online test

Memory Puzzle The Riot in Ephesus

Spanish Bible Activities Select story #264 in the list for activities to accompany this Bible story.


Books
Press "Go" to search for books about the Apostle Paul.
Credits and Solutions
Puzzles on these pages courtesy of
Songs of Praise and Armored Penguin