Paul a Prisoner in Rome 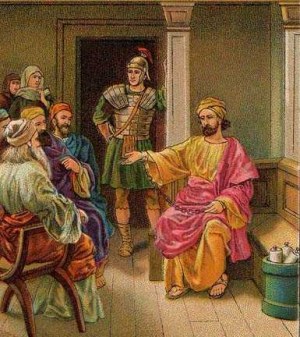 When Paul got to Rome he was allowed to be put under "house arrest". He was permitted to live by himself with a soldier to guard him.

After three days he called together the Jewish leaders of the city and told them his story. They were glad for an opportunity to talk with him. They had heard people talking about this new religion, and they wanted to learn more about it.

They made arrangements to meet again, and even more people came to the house. Paul talked to them all day long, from morning to evening. He told them about Jesus. He tried to show them that Jesus was the One about whom the prophets had written. Some of the people were convinced, but others would not believe his words.

Paul was able to preach for two whole years from his rented house. Secular history (not the Bible) tells us that Paul was beheaded around AD 67.

If you visit Rome today you can see the remains of the Colosseum which was completed in 80 A.D. (which would probably be after the death of Paul). 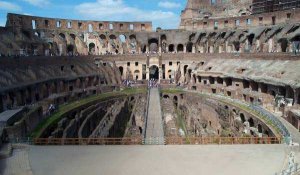 The Colosseum in Rome
Enlarge

The Colosseum was started by Vespasian in 72 A.D. and completed by his son Titus in 80 A.D. It served the same purpose as our stadiums today, but the games were more violent. Gladiators fought to the death and wild animals were killed. The Christians also suffered persecution in the Colosseum.

Over the years earthquakes caused great damage to the structure, but a great deal of it remains to this day.

What does this story
mean to me?
It would seem that Paul was at a disadvantage in Rome because of his imprisonment. He could not go to different places to preach, but was confined to the house. Some might see it as a handicap.

Are you handicapped in some way? Are you not able to move about or speak as other people can? Do you have difficulty learning? God can use you in any circumstance. Sometimes God's strength is shown in our weakness. Do everything you can to overcome the handicap, then accept it and let God work through you.

Memory Verse
May God be gracious to us and bless us and make his face shine upon us; may your ways be known on the earth, your salvation among all nations. Psalm 67:1-2 NIV

More pictures of Paul in prison 1, 2, and 3
Take the online test

Research Links
English Bible #270 in the list for activities to accompany this Bible story.

Spanish Bible Activities Select story #270 in the list for activities to accompany this Bible story.