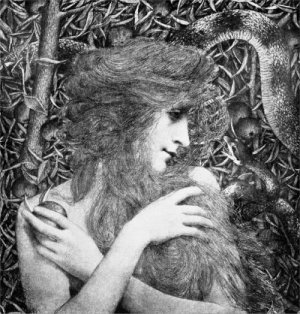 In six days God created the world and everything in it. His creation was perfect and the world was perfect. There were trees, flowers, grass and animals of every kind. He had also planted a garden called Eden and had created a man, Adam to care and tend the garden. He told Adam he could eat of any tree in the garden except the tree of knowledge of good and evil. Of that tree he was not to eat or he would die.

God let Adam remain alone for a time. He became lonely. There was no one for him to love, to communicate with. He was the only human in the world. God saw that it was not good for him to be by himself, so he made a helper for him. He did not make her as he had made the animals and Adam from the dust of the ground. Instead he had something very special in mind for Adam. He caused him to go to sleep and took a part of his side, a rib and formed Eve from that. When Adam woke up and saw her he was amazed. He said she is "bone of my bones and flesh of my flesh". They were so happy together.

Eve knew about the tree in the middle of the garden and the fact that they were not to eat of it. Either God or Adam had told her the law about what they could and could not eat.

One day the tempter in the form of a serpent came to Eve. He asked her about what they were allowed to eat and she told him they could not eat of the tree in the middle of the garden. They were not allowed to eat it or even touch it. The penalty would be death. The serpent said to her, "You shall not surely die." He told her just the opposite of what God had said. He convinced her that God didn't want them to eat of that tree because if they ate of it they would be like God. Eve began to look at the fruit in a different way; it was so beautiful, looked so good to eat, and if she ate it she could be just like God. She was overcome by the temptation. She took the fruit and ate it. Adam was right there with her and she gave some to him and he also ate. Adam blamed Eve for their sin, and Eve blamed the serpent.

It was just a piece of fruit, but it was a forbidden fruit. God had tested them and they had failed the test. Never would things be the same again. Because of their sin, trouble came into the world. Adam's work would be hard now because thorns and thistles would grow in the garden and have to be removed. The woman would experience pain in her body when she had her children, and the serpent himself was cursed to crawl in the dust of the ground.

They had to leave the beautiful garden where life had been perfect. Eve began to have children. First Cain and Abel then many more sons and daughters. From these first two people came all the people who have ever lived on the earth. We don't know how long Eve lived, but Adam her husband was 930 years old when he died.

What does this story
mean to me?
When God tells us to do something or to refrain from doing certain things, it is for our own good. We should not question His commands nor try to find ways to keep from obeying. We, like Eve, can rationalize and start making excuses for not obeying God, but we will always suffer for acting in such a way. He made us and He knows everything about us. He knows what is good for us. He knows how He wants us to live in order to be pleasing to Him. The tempter, the devil, is still working in the world today, and he will tell us the same lie he told Eve. He will tempt us to do just the opposite of what God wants for our good.

You can read about Eve in
Genesis chapters 2 and 3

Memory Verse
And Adam called his wife's name Eve; because she was the mother of all living. Genesis 3:20 KJV
Take the online test

Spanish Bible Activities Select stories #2-4 in the list for activities to accompany this Bible story.