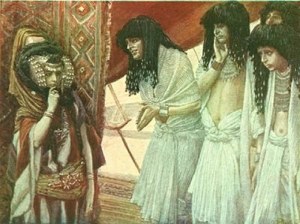 Sarah was the Wife of Abraham. Abraham was a man of God. He talked to God and God talked to him. One night God told him to look at the stars and count them if he could. "So shall your descendants be," God said. Even so, Abram (as he was called then) and his wife, Sarai did not have a child at that time. They grew older and older and there was still no child.

Sarah decided that God didn't mean for her to have a child, so she let her Egyptian servant, Hagar, take her place to have a child in the family. A son, Ishmael, was born to Abraham.

Once during a severe famine Abraham moved his family to Egypt. Before they got to Egypt he asked Sarah to tell the people she was his sister. She was a beautiful woman and Abraham was afraid the Egyptians would kill him in order to have his wife. She was called to the attention of Pharaoh and he took her into his house, but terrible things began happening to him. God sent plagues upon Pharaoh's house. He found out they had lied to him and that Sarah was really Abraham's wife. He sent them away letting Abraham keep all the sheep, oxen, donkeys and camels he had given him.

Abraham told the same lie again to King Abimelech. The king was going to take Sarah as his wife because he had been told she was Abraham's sister. Actually she was his half-sister, but it was still a lie because she was also his wife. God appeared to Abimelech in a dream and told him he was a dead man if he married Sarah. The king confronted Abraham with the lie and released Sarah to her husband. He also gave Abraham animals, servants and a thousand pieces of silver.

When Abram was 99 years old God renewed His covenant (His promise) with him and changed his name to Abraham and Sarai was to be called Sarah.

One day three men came to Abraham's tent. He had food prepared for them and they began to talk to him. They told him Sarah was going to have a son. Sarah, who was listening inside the tent, laughed out loud because she was 90 years old and her husband was 100! That was very old for a couple to be having a child. The messenger from God said, "Is anything too hard for the Lord? At the appointed time I will return to you, according to the time of life, and Sarah shall have a son."

And so she did. A son was born to her when she was 90 years old and Abraham named him Isaac, a word which means "laughter".

Sarah when she died was 127 years old. Her son Isaac would have been 37. Abraham bought a field near Hebron in which there was a cave. The owner wanted to give it to him, but he insisted on paying for it. He buried Sarah in the cave of Machpelah.

We read of Sarah in the New Testament in 1 Peter 3:5-6 "And they followed the lead of their own husbands." (New International Reader's Version)

Sarah was like that. She obeyed Abraham. She called him her master. Do you want to be like her? Then do what is right. And don't give in to fear.

Read the story in Spanish Sara

What does this story
mean to me?
Sometimes we think we know what is best for our lives and we work to make it happen, but God may have a different timetable for events to occur. His schedule may be different from ours. We need to learn patience and wait for God to bring about changes in our lives.

We make mistakes and do wrong things just as Abraham and Sarah did, but God is forgiving and will bless us if we repent and change our ways.

You can read about Sarah in
Genesis 20 and 21

Memory Verse
"Sarah shall be her name. And I will bless her and also give you a son by her;
then I will bless her, and she shall be a mother of nations; kings of peoples shall be from her." Genesis 17:15-16 NKJV
Take the online test

View a Slideshow about Sarah Wife of Abraham

Spanish Bible Activities Select story #12 in the list for activities to accompany this Bible story.


Books
Press "Go" to search for books about Sarah.
Credits and Solutions
Puzzles on these pages courtesy of
Songs of Praise and Armored Penguin