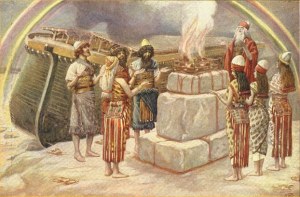 People on earth had become very wicked and God was displeased. One man, however, found favor with God and that man was Noah. Noah was a righteous man and did what was pleasing to God. God told Noah He was going to destroy the wickedness which was on the earth, but Noah and his family would be saved.

God told him to build an ark for the saving of his family and the animals on the earth. He told Noah, "But I will establish My covenant with you; and you shall go into the ark, you, your sons, your wife, and your sons' wives with you." He told Noah exactly how to build the ark.

We do not know the name of Noah's wife. The Bible doesn't tell us her name. Some have speculated she was the woman Naamah mentioned in Genesis 4:22, but we really don't know, so we will refer to her as Mrs. Noah.

She must have been a strong woman of faith just as Noah was a man who believed God. Their three sons, Shem, Ham, and Japheth were born after Noah was 500 years old. Mrs. Noah was probably quite old also by that time. As the boys grew up she must have trained them in the way of the Lord. They helped Noah get ready for the flood which God said was coming. They evidently chose wisely in selecting wives who would be a help to them and not a hindrance.

She must have been a patient woman. It took a long time for Noah to build the ark, 100 years or more because we know Noah was 600 years old when the rain began to fall.

Noah's father Lamech and grandfather Methuselah both lived during the time of the building of the ark, but died shortly before the flood began, Lamech died five years before and Methuselah lived right up until the time of the flood before God took him. So Noah had some support from his extended family during those years. We don't know what happened to Noah's younger brothers and sisters.

Mrs. Noah probably had to endure the ridicule of friends and neighbors as they watched the construction of the huge boat Noah was building, but she never lost faith in God nor her husband.

When the time was right the family went into the ark and the rains came. It rained for 40 days and 40 nights. After the rain stopped it took a long time for the waters to go down and for the land to dry. The ark was their refuge for a year and ten days. Imagine being cooped up with those animals for such a long time.

After the flood was over and the land had dried up, Noah and his family left the ark. The first thing he did was to build an altar and sacrifice some of the clean animals to God. Someone may say, "But he only took two of every animal into the ark", but that is not quite right. We read in the Bible that God had commanded him to take seven each of every clean animal which was suitable for sacrifice, and two of every unclean animal.

When Noah, Mrs. Noah, and the sons and daughters-in-law looked up in the sky they saw a beautiful rainbow. It was the sign of God's promise He would never again destroy the earth with a flood.

What does this story
mean to me?
In the story of Noah and his family we see God's providential care for those who love and obey him. Even though others around us may be doing the wrong thing, we need to remember that we belong to God and He expects us to act differently than those who do not know Him. Don't follow the crowd to do evil, but stand up for what you know is right.

Others may make fun of you if you don't engage in their activities. They may exclude you from their group and gang up on you to make you unhappy, but be strong and know that you are doing the right thing.

Memory Verse
Who can find a virtuous wife? For her worth is far above rubies. The heart of her husband safely trusts her; so he will have no lack of gain. She does him good and not evil all the days of her life. Proverbs 31:10-12 NKJV
Take the online test

Research Links
English Bible Activities Select stories #7 and 8 in the list for activities to accompany this Bible story.

Spanish Bible Activities Select stories #7 and 8 in the list for activities to accompany this Bible story.


Books
Press "Go" to search for books about Noah and the Ark.
Credits and Solutions
Who Was Mrs. Noah at Christian Answers