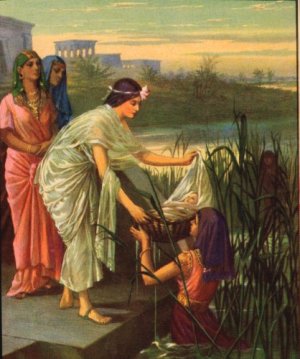 The parents of Moses were slaves in Egypt. The Israelites had been enslaved for hundreds of years. When you read the story of Jochebed, his mother, you learn that she hid him for three months after his birth. To escape the decree of the wicked Pharaoh of Egypt she put him in a waterproof basket in the Nile river.The Nile river was essential to life in Egypt and the Egyptians thought the river had special powers.

What if the basket turned over and the baby drowned? What if it floated down the river and the crocodiles found it? What if it were found by the soldiers? What would happen to their beautiful baby?

His older sister Miriam watched to see where the ark would float. The daughter of Pharaoh came down to bathe in the river. We do not know her name. Perhaps Jochebed may have known this was the place where the princess regularly bathed and was hoping she would be kind-hearted and compassionate.

The princess saw the ark floating in the water among the reeds and sent her maid to get it. When she opened it the baby began to cry. Was it just coincidence the basket floated to the very spot where the princess was bathing? Did the baby just happen to cry and touch the heart of Pharaoh's daughter? No, God's hand was in all the events of that day so long ago. He had a special job for this baby boy when he grew up to be a man.

Pharaoh's daughter immediately recognized the child as one of the Hebrew babies. She knew her father's decree that all male babies of the Hebrews were to be killed. In order to keep the baby she would have to go against her father's wishes. The child would be subjected to prejudice because he was a Hebrew.

Miriam came from her hiding place and offered to get a nurse for the baby. She went to get her mother, of course. The princess said to Jochebed, "Take this child away and nurse him for me, and I will give you your wages." Not only would Jochebed get to care for her child, she would be paid for doing it!

When he was old enough to leave his mother, the child was brought to the palace to live with the princess. She called his name "Moses" because as she said, "I drew him out of the water." He became her own son and she gave him the best education Egypt had to offer. We read in the book of Acts, "Moses was learned in all the wisdom of the Egyptians, and was mighty in words and deeds." He probably learned about history, astronomy, plants, and animals. And without a doubt knew how to read Egyptian hieroglyphics. After all, he was the son of Pharaoh's daughter. Some scholars think he may have been in line to become the ruler of Egypt.

We know very little about the princess except for these few verses in the Bible, but we know she was a kind person with a tender heart. She was also brave in defying her father, the pharaoh. We wonder what she told the people in the palace about Moses. Did she tell them about finding him in the Nile river? Was he accepted by the other Egyptian children? We don't know any more about the years when he was growing up. The next time we hear of him, he is a grown man.

The brave women in this story helped Moses fulfill God's mission for him. The princess saved him from death and the early training he received from his birth mother prepared him to later leave the splendor of Egypt to lead the children of Israel out of Egyptian bondage.

God is able to do "exceedingly abundantly above all that we ask or think" (Ephesians 3:20-21) Don't be afraid to ask God for help.

Memory Verse
By faith Moses, when he became of age, refused to be called the son of Pharaoh's daughter, choosing rather to suffer affliction with the people of God than to enjoy the passing pleasures of sin, esteeming the reproach of Christ greater riches than the treasures in Egypt; for he looked to the reward. Hebrews 11 :24-26 NKJV
Take the online test

Spanish Bible Activities Select story #35 in the list for activities to accompany this Bible story.