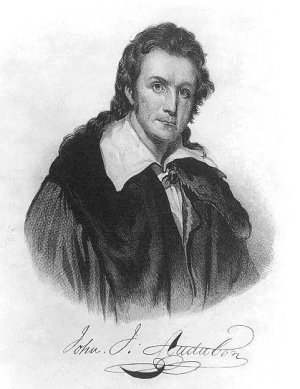 John James Audubon was the illegitimate* son of a sea captain, Jean Audubon and a servant girl on a sugar plantation in Haiti. His mother Jeanne Rabin died when he was not yet a year old. His father cared for him a couple of years then sent the child to France to be raised by his middle-aged wife Anne, who was fourteen years older than her husband. This selfless woman lovingly raised John and also his half-sister as her own children. She was 58 years old and provided education and nurtured the children throughout their childhood. John had a great love and respect for his step-mother.

When he was a boy he enjoyed wandering through the woods, collecting things from nature, and watching the birds. He began to draw pictures of birds and animals.

When Jean Jacques (as he was called) was eighteen years old his father either sent him or went with him to America. He was afraid the boy was going to be drafted into Napoleon's army, and he wanted to get him to a safer place.

Upon arriving in America the young man changed his name to John James which sounded more like an American name. His father had set up some businesses and purchased Mill Grove farm near Philadelphia for him to oversee.

He continued to draw. He changed from the use of pastels* to watercolors. He taught himself through trial and error specializing in birds.

He met a young woman named Lucy. They married and she was a constant source of encouragement to him. He said of her, "With her, was I not always rich?" They would have four children. Their two daughters died when they were babies, but their two sons lived to adulthood. The sons, Victor and John, would become artists and help their father with the painting of the backgrounds for his birds.They were also active in the publication of his works.

When he was 35 years old he took an eight month trip down the Mississippi River to find and paint birds.

Lucy, a teacher and governess,* was able to support herself and their two sons while Audubon pursued his dream of publishing a book of drawings of birds.

Audubon was the first person to start bird-banding studies in America. He tied lightweight strings to their legs, and he could track their travels as they nested, left the area, and then returned to the nest.

He was not experiencing success in America selling his paintings, so he went to England to sell subscriptions. His clients had to subscribe to his engravings which were delivered in installments, five engravings at a time. There would be one large picture of a bird, one medium-size bird, and three small birds. The pictures were printed from copper plates then watercolored by hand. A subscription cost $1,000, which was a lot of money in the 1800's.

While in England he dressed as a woodsman and let his hair grow long. He worked long hours and painted in public so people could watch him work.

Audubon went through many financial hardships. If Lucy had not been such an independent woman, he probably could not have fulfilled his dream. He gave art lessons to support himself, and at one point even taught dancing lessons to make a little money while he looked for a publisher for his drawings.

At one point early in his career he left 200 of his bird drawings with a friend. When he returned several months later he discovered that a pair of rats had shredded his pictures to make a nest and raised a family in the box. It was such a tragic event in his life because he had spent years making the drawings. The only thing to do was start over. This is what he did, even making improvements, and within three years his bird portfolio was full again.

Another artist Alexander Wilson had already published a set of bird prints; American Ornithology,* but Audubon thought he could do better, and he did. His pictures were more life-like and also life size. He had them printed on large sheets of paper 22"X 28". The finished portfolio after it was leather bound was about 26 1/2"X 39". This portfolio of large prints was labeled a "Double Elephant" portfolio. It was called Birds of America. The huge leather bound books originally sold for $1,070 in 1826. Some people who bought the books would break them apart and sell the individual pages. Few of the books remained intact. In 2003 a complete leather bound four-volume set sold for over $8,000,000.

Audubon and his printer, Robert Havell, printed a smaller version called the Octavo Edition* (think "octave" or eight notes). This edition was one-eighth the size of the first edition and Audubon called it Birds in Miniature. It was 6 1/2"X 10 1/2". 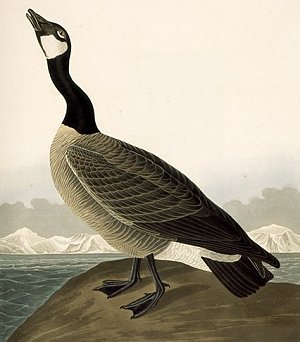 He then published a large book of animal drawings, The Viviparous Quadrupeds of North America and then a smaller octavo edition.

Audubon during this period suffered a stroke, and he was also in the early stage of Alzheimer's disease.* He died four months before his 66th birthday. Lucy lived another twelve years and tried her best to support the families of their sons who had also died.

After her husband's death she started a school and one of her students loved birds just as Audubon had. George Grinnell later started the Audubon Society. 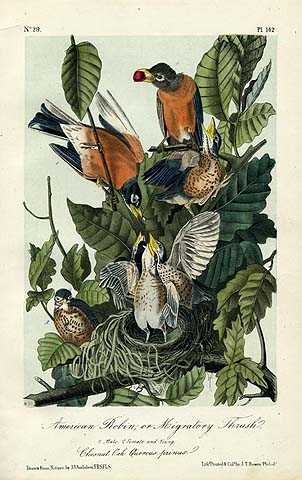 Books
Press "Go" to search for books about Audubon.
Library

In the Days of Audubon, A Tale of the "Protector of Birds"
by Hezekiah Butterworth (public domain, 1901, full view)

Under a Wild Sky: John James Audubon and the Making of the Birds of America
by William Souder (selected pages)

Audubon, the naturalist of the New World: His adventures and discoveries
by Mrs. Horace St. John (public domain, 1899, full view)