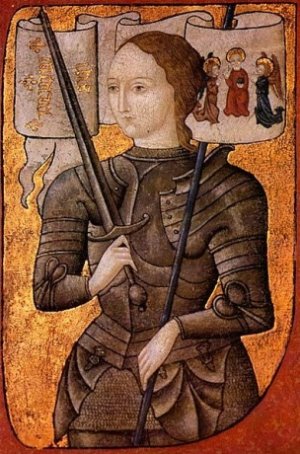 Joan of Arc had a great faith in God. She believed she had been chosen to lead the army of France in battles with England. She carried a banner onto the battlefield, but no weapon. She didn't want to hurt anyone. The English soldiers were afraid of her because they felt she had supernatural* power.

Her father wanted her to get married, but she said she wanted to follow God's calling. She didn't want to marry - and she didn't.

During the battle at Orleans, she was struck by an arrow. She pulled the arrow out and continued to lead. 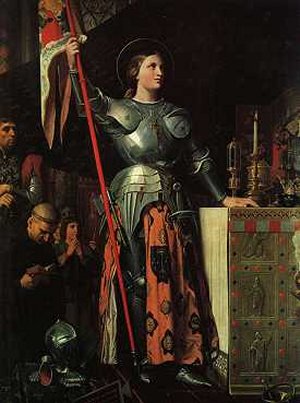 News of her courage began to be told, and sometimes people would just give up rather than face her in battle.

She dressed in men's clothing and cut her hair short so she would not be recognized on the open roads.

Once, when she was imprisoned, she threw herself out of a prison tower. She fell 70 feet to the ground, but she didn't die. They put her back in prison and then in a few months she was put on trial. They said she was guilty of witchcraft* and of wearing men's clothes.

She died as a martyr.* She was burned to death.

Later there was another trial and they said she was not guilty, but that she was innocent.* She has even been declared a saint* by the Roman Catholic church.

There is disagreement about her education. Some people say she never did learn to read nor write, but you can look at copies of letters that others say were written by her. 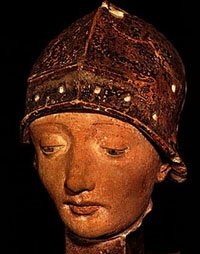 witchcraft, sorcery
Pronunciation: 'sors-(ə-)'rE
Function: noun
: the use of powers gotten with the help of or by the control of evil spirits...

saint
Pronunciation: 'sAnt
Function: noun
1 : a holy and godly person; especially : one who is declared to be worthy of special honor
2 : a person who is very good especially about helping others...

disagreement
Pronunciation: dis-ə-'grE-mənt
Function: noun
1 : the act of disagreeing
2 a : the state of being different b : a difference of opinion...

Personal Recollections of Joan of Arc by Mark Twain
from Wikipedia

5 Inspiring Lessons of Faith from Joan of Arc

The Trial of Joan of Arc, 1431
from Fordham University

At biography.com search for Joan of Arc.
Scroll the panel for the "Video & Audio Results".

The Life and Death of Joan the Maid
from The Red True Story Book by Andrew Land (public domain, 1895, full view)

Beyond the Myth: The Story of Joan of Arc
by Polly Schoyer Brooks (selected pages)