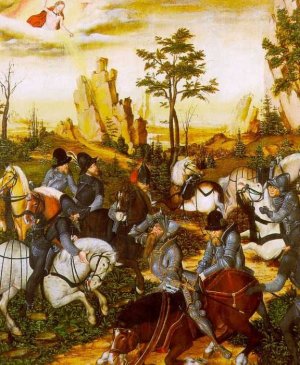 Lucas Cranach (KRAH nahk) the Younger was the son of Lucas Cranach the Elder. The name Cranach was not really the family name, but the name of the city, in which they lived. (The city of Cronach was in Franconia which was in Germany.)

In the painting, Conversion of Paul, Jesus is appearing to Saul of Tarsus as he is on his way to Damascus to persecute Christians. Read the scripture to learn more about this interesting story.

You can read about the conversion of Saul in Acts 9:1-19.

Portrait of Lucas Cranch the Elder
painted by his son

Information about Lucas Cranach, the Elder
at Humanities Web