WOMAN WALKING IN AN EXOTIC FOREST 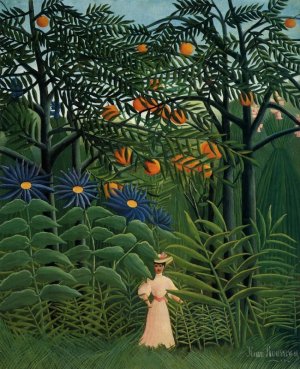 Henri Rousseau (ahn REE roo SOH) was born in northwest France in the city of Laval. The home where the family lived was part of a tower which was fortification for a town. His "house" was hundreds of years old.

He liked to draw and was determined to become an artist, but his parents didn't realize they had such a talented son.

He enjoyed music and played the clarinet. Once he wrote a waltz and named it for his wife. (Don't confuse him with Jean Jacques Rousseau, the composer.)

He served for a time in the French army and fought in Mexico, or so he told people. However some say he had been in jail during that period of his life.

He worked as a toll collector for the city of Paris. His friends called him Le Douanier (luh dwan YAY) which means custom official, but actually he just collected toll money. When he was 49 years old he retired from this job and devoted the rest of his life to painting.

He was a primitive artist; self taught. He would go to the Louvre and copy the paintings. Even when he started making his own paintings he sometimes copied from other artists such as Delacroix's tiger when he painted Scout Attacked by a Tiger. 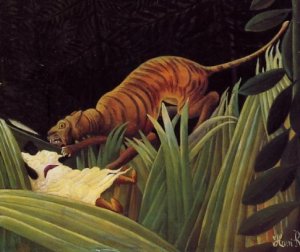 The Scout Attacked by a Tiger (detail)
Enlarge

Life in the wild is portrayed in many of his paintings as in Fight Between a Tiger and a Buffalo. 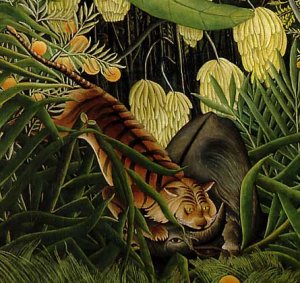 Fight Between a Tiger and a Buffalo (detail)
Enlarge

He enjoyed going to the botanical garden in Paris and looking at the plants and the zoo animals. Aat the Jardin des Plantes he had a secret arrangement with one of the gardeners who let him spend hours painting the greenery. Instead of making the plants their actual size, he would make them as big as trees. This made the picture resemble a fantasy world. Many people just laughed at his paintings because they looked so unreal.

When painting portraits for people he took his sitter's measurements as a tailor might measure them for clothing. Some people thought this was a strange way to begin a portrait.

A lion lurks near in The Sleeping Gypsy which shows impending danger for the woman in this night scene by Rousseau. 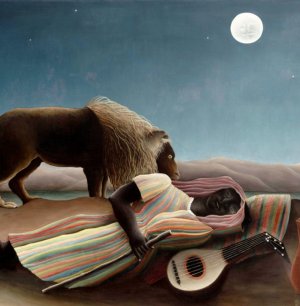 He had unusual ideas for paintings. In The Football Players the men look as if they are on a stage performing a ballet. 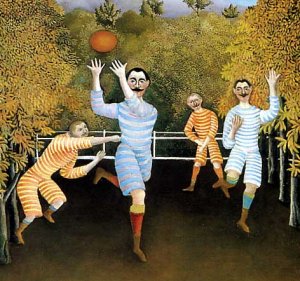 He took some of his artwork to the Salon, which was an official art exhibit in Paris, but they wouldn't even consider it. He went to a group of independent artists and exhibited Carnival Evening . Picasso liked his work and saw the value in it. Picasso even gave a banquet in his honor. Rousseau had found a place of acceptance.

He was married twice. With his first wife Clemence, he had nine children, but she died and so did seven of their children. His second wife also died after they had been married for four years.

Rousseau wanted to be known as a great artist, but was unappreciated for most of his life. In the end he was a rather lonely man. He died at the age of 66 from a leg infection. Only seven people attended his funeral. About a year after his death his paintings began to sell, but he had not lived to see the recognition he craved. 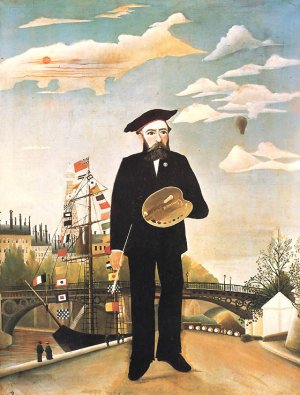 Rousseau Biography
from the Artchive


A short film about Henri Rousseau

Art safari: an adventure in looking for children and parents at the Museum of Modern Art
by Joyce Raimondo (selected pages)