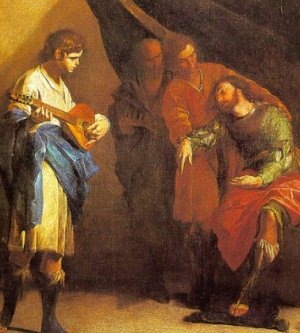 We don't know much about Cavallino (cah və LEE no). He was an Italian, born in Naples. There are only eight paintings remaining that are signed by him. It is possible that some of his paintings were sold with other artists' signatures on them.

He preferred doing small paintings and he liked to paint religious figures and scenes from the Bible. Sometimes he painted characters from Roman mythology.

In the 1600's a disease called bubonic plague killed thousands of people in Europe. It is thought that Cavallino died in the plague in 1656.

In this painting we see David, the shepherd boy, who was also a musician, playing to help to soothe the troubled mind of King Saul. When David played Saul felt better. Today we might refer to this as "music therapy".

The artist highlights David by showing him in white clothing and making his features distinct.

Another religious painting by Cavallino is Queen Esther appearing before King Ahaseurus. She is pleading for the lives of the Jewish people who had been ordered to be killed. 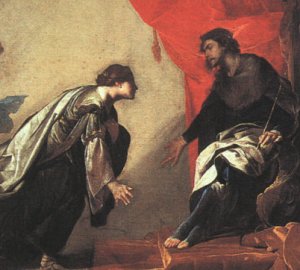 The story of the friendship of David and Jonathan can be found in the Bible in First Samuel chapter 20.

Other works by Cavallino