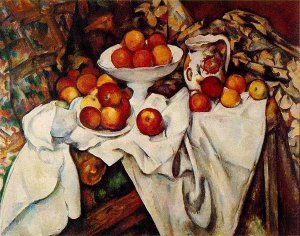 Paul Cezanne (say ZAHN) was born in France. His father was a wealthy banker and he wanted his son to become a banker. He did not approve of Cezanne's plan to become an artist, but he went on to Paris anyway. After a while, his father sent him a small allowance on which to live.

When he got to Paris, his paintings were so rough that none of the official art schools would admit him as a student. At first his paintings were done in dark colors, but Pissarro, another painter, encouraged him to paint out in the sunlight, and his paintings came alive with bright colors.

He was an Impressionist, but his paintings did not have the light airy look of many Impressionists. Instead of putting flecks of paint on the canvas he put slabs of color. His pictures were solid in appearance.

Cezanne was a versatile artist. He painted many different subjects in multiple styles. Sometimes he painted the same subject over and over again. Look at the examples below. The first picture is a group portrait. He also painted individual portraits of men and women. 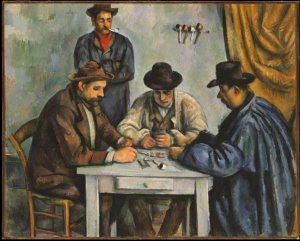 The second picture is a still life with flowers. In other pictures he used arrangements of fruit and common objects. 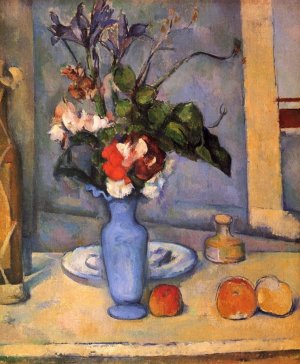 The third picture is a landscape. He also painted seascapes. 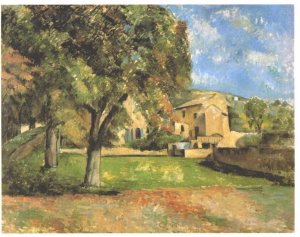 Cezanne considered shapes to be the basic forms; the sphere, cone, and cylinder. Look at the painting, Apples and Oranges at the top of this page and find these shapes in the fruit, the pitcher, and the bowl. See a lesson about the painting.

He painted Mont Sainte-Victoire many times in the late 1800's and early 1900's. The picture shown here shows a street in front of the Sainte-Victoire mountain. You can see others at Web Museum, Paris. Some of the pictures feature the mountain itself and others only have it in the background. 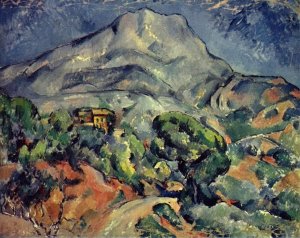 He did not like to be with other people and isolated himself, even from his friends. When he was 47 years old, his father died and he inherited his father's wealth.

He complained that he could not paint pictures of people properly, and in fact his still lifes; pictures of objects in settings, became his best works.

Cezanne had a friend, Emile Zola, who had been his friend since they were children. Zola was a writer and wrote a novel about an artist who was a failure. Cezanne was not very well known at that time and he thought Zola had used him as a basis for his main character. Whether this was the case or not, he ended the friendship with Emile and the incident would affect the rest of his life.

He was not very successful until in 1895 when Vollard, an art dealer in Paris, exhibited his works and he began to enjoy the success for which he had longed. 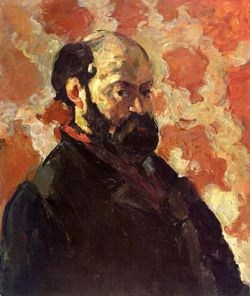 This biography written by Patsy Stevens, a retired teacher.

Other Activities
View a slideshow about Paul Cezanne

Research Links
Story about the painting

Books
Press "Go" to search for books about Cezanne.
Library

Cezanne and the Apple Boy
by Laurence Anholt (selected pages)

Impressionist Art Masterpieces to Color
by Marty Noble (no preview)