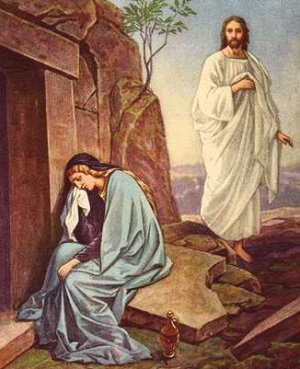 A man named Joseph from Arimathea went to Pilate and asked for the body of Jesus. Joseph, a rich man, was a disciple of Jesus. He took the body of Jesus down from the cross. He wrapped it in a linen cloth and put it in his own new tomb, or burying place.

Pilate, the ruler, put guards at the tomb because some men were afraid Jesus' disciples would steal his body from the grave and then say that he had been raised from the dead.

Early Sunday morning some women went to the tomb. They brought some spices that they had prepared to put on the body of Jesus. There was a great earthquake, and an angel came and rolled back the stone from in front of the tomb. Then the angel sat on the big stone.

The angel said to the women, "Don't be afraid, Jesus is not here. He has risen, as he said he would. Come and see where he lay."

The angel told them to tell this to the disciples. As they were leaving, Jesus met them. He said, "Tell my brothers to go to Galilee and there they will see me." They did see him and he ate with them. 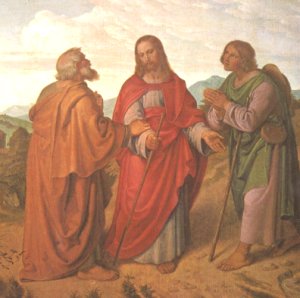 Two men were going to the village of Emmaus. Jesus started walking along with them and talking to them. Later when they were ready to eat, Jesus gave thanks and broke the bread. Instantly they recognized him. They went to find the Eleven to tell them what had happened.

How happy they were! Jesus was alive again!

Read the story in Spanish ¡ Regresó a la Vida!

What does this story
mean to me?
Some people do not believe that Jesus rose from the dead. Some say he didn't die at all. Don't believe them! Many witnesses saw Him after He died and after He rose from the dead. We have their accounts in the gospels. Don't you think if his body had remained in the tomb his enemies would have told everyone about it?

The truth is, His body was not still in the tomb. He was raised from the dead, and because of this, we also have this same hope. We will also be raised at some point in time. What a wonderful thought! We can have a happy life here and now and an even happier one when this life is over.

The story of the Resurrection can be found in each of the gospels. We looked in Luke 24

Memory Verse
But he said to them, "Do not be alarmed. You seek Jesus of Nazareth, who was crucified. He is risen! He is not here. See the place where they laid Him." Mark 16:6

Spanish Bible Activities Select stories #238-240 in the list for activities to accompany this Bible story.