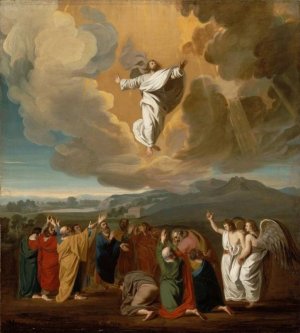 During the 40 days after Jesus' resurrection, (being raised from the dead), he appeared to his disciples from time to time. He spoke to them about the kingdom of God.

Once he told them to stay in Jerusalem and wait for the gift he would send them. That gift would be the Holy Spirit. He would live in them and guide them. He would be a Comforter to them. Jesus wanted them to tell everyone on earth that he had died for them. He told them to teach and to baptize those who believed.

After Jesus said this, he was taken up to heaven right in front of their eyes. A cloud hid him from their sight and two angels, who looked like men dressed in white, came and stood beside them.

The angels said, "Why are you looking up in the sky? This same Jesus who has been taken up into heaven will come back some day in the same way you have seen him go into heaven."

We also believe that he will come again.

What does this story
mean to me?
The last thing Jesus told His disciples before going back to God was to teach others. How are we going to do that? What is your part in carrying out His command?

You can tell your friends about Jesus. You can teach them songs about Jesus. They can see you behaving in a Christ-like manner. Let Him have center stage in your life, and God will show you other ways you can serve.

This story about the Ascension can be found in the Bible in Acts 1:9-11

Memory Verse
And he said unto them, Go ye into all the world, and preach the gospel to every creature. He that believeth and is baptized shall be saved; but he that believeth not shall be damned. So then after the Lord had spoken unto them, he was received up into heaven, and sat on the right hand of God. Mark 16:15-16, and 19
Take the online test

Spanish Bible Activities Select story #244 in the list for activities to accompany this Bible story.