Jesus and the Money Changers 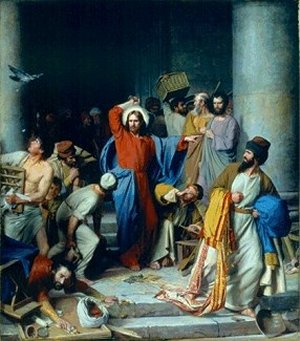 Jesus had been teaching, healing, and doing many wonderful works. It was time for the Passover feast, an annual feast of the Jews. Jesus entered Jerusalem riding on a donkey. The people put their coats on the ground and cut branches from the trees and waved them as they cried out, "Hosanna in the highest!" It was a joyful triumphant occasion.

Jesus went into the temple and looked around at everything that was going on, but it was late and he didn't stay. He and his twelve disciples went back to Bethany and spent the night.

The next day they went back to Jerusalem and again Jesus went to the temple, but this time he took action. Men were selling the animals for sacrifices right there in the area of the temple! He knew this was not right and he did something about it. He made a whip out of cords, or small ropes and he drove the money changers out along with the sheep, oxen, and doves. He turned the tables over and poured out the money on the floor of the temple.

He said, "Take these things away! My Father's house shall be called a house of prayer, but you have made it a 'den of thieves.'"

The Jewish religious leaders were very upset by all this and they began looking for a way to destroy Jesus. However, they were afraid of him because all the people were amazed at his teaching.

Under the law of Moses people were required to offer animal sacrifices. If you had to travel a long way to get to the temple in Jerusalem, you would probably not take your animal with you. You would take some money and buy an animal for your offering after you got to Jerusalem. It was not wrong for men to sell the animals, but they should have been selling them outside the temple area. There is also indication that the price of the animals was too high since Jesus called them "thieves".

Then blind and lame people came to him in the temple and he healed them. The children were crying out, "Hosanna to the Son of David!" When the religious leaders heard this, they said to him, "Do you hear what they are saying?"

Of course, Jesus did hear and he accepted their praise. He told the leaders that this was "perfect praise" coming from the lips of the children.

What does this story
mean to me?
When Jesus saw something happening that was wrong, he did something about it. He didn't just pass quietly by and say nothing.

Suppose you see someone being mistreated or ridiculed. Kids are saying ugly things to your friend or a classmate. What do you do? Do you join in and make fun of him or her also? Do you just stand quietly by and say nothing? Or do you take up for the person and try to stop the teasing.

It may be appropriate for you to inform an adult about the situation. Talk to your family about it.

This story about Jesus in the temple can be found in the Bible in Matthew 21:12-17,

Memory Verse
It is written, "My house shall be called a house of prayer, but you have made it a 'den of thieves.'" Matthew 21:13 (NKJV)
Take the online test

Memory Puzzle Jesus at the Temple

Spanish Bible Activities Select story #177 in the list for activities to accompany this Bible story.


Books
Press "Go" to search for books about Jesus Cleanses the Temple.
Credits and Solutions
Puzzles on these pages courtesy of
Songs of Praise and Armored Penguin