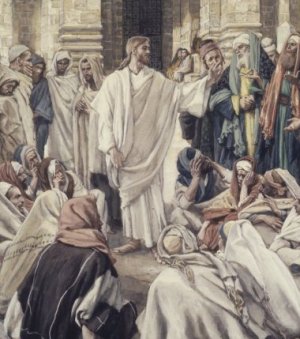 When Jesus was on earth, He was generally kind and loving toward people. But there were some people who were not recipients of his kindness, but of his anger. These people pretended to be religious, but they were very unloving and unmerciful to other people

He spoke harsh words to the Jewish religious leaders known as the Pharisees (FAIR uh seez). These men were very careful to tithe, or give one-tenth of all their income as an offering to God, but sometimes they would call attention to themselves so that people could watch them put their money in the collection. They were very proud of the fact that they were observing the law of Moses, but they were uncaring.

Jesus compared them to tombs that had been painted with whitewash and looked very beautiful on the outside, but in reality they were like graves full of dead men's bones, not beautiful at all.

These men would even kill the prophets that God had sent, if they didn't want to hear the message they brought. When John the Baptist came preaching and telling them to repent, they did not listen to him and they refused to be baptized.

The Scribes were a part of the Pharisee group. They copied the law by hand, and they were regarded as important because they interpreted it and told the people the meaning of the Jewish law.

They were very proud of themselves and wore long robes with broad borders, or fringes on them to show their importance. They wanted to get the best seats in the synagogues, the places of worship. They loved for people to call them "Rabbi", or teacher, and they would pray long prayers out in public just for people to see them.

The common people looked up to the Pharisees and regarded them as very religious.

Now it was not a bad thing to be a Pharisee. It was a good thing. Jesus was condemning these Pharisees because of their "hypocrisy" (hih POK ruh sih). They preached the truth, but in their lives, they just pretended to obey God's law. They really did not respect or care about others. We call such people "hypocrites" (HIP uh krits).

The Sadducees (SAJ uh seez) were Jewish religious leaders who were from the wealthy families. This group did not believe that people would be resurrected, or raised from the dead. They also did not believe angels existed.

Memory Peg: To not believe in the resurrection or in angels could make them "sad, you see" (Sadducee).

There was a Jewish ruling council called the Sanhedrin (SAN he drin). It was composed of a group of 71 men* who were Pharisees and Sadducees. Not all the religious leaders were proud and conceited. You may be familiar with three good Pharisees who were prominent in Bible times; Paul the apostle, Nicodemus, and Gamaliel (guh MAY lee uhl), a wise man on the council.

* According to some sources there were 70 men and the high priest presided over the council.

What does this story
mean to me?
What was wrong with the Pharisees? Did they care about others? Jesus said they looked like good people, but really they were wicked inside. They thought they could please God just by obeying a lot of rules.

Obeying rules is good. We have rules at home and rules at school, and these are necessary to make our lives run smoothly.

But you cannot get to heaven by obeying rules. Jesus said the most important thing is LOVE. The first commandment is to love God, and the second is to love others. If you love God and love others, you will always do the right thing, no exceptions. Make this your goal to love God first and put others before yourself.

You can read about the Pharisees and Sadducees in the Bible in
Matthew 23:1-36

Memory Verse
The scribes and the Pharisees sit in Moses' seat. Therefore whatever they tell you to observe, that observe and do, but do not do according to their works; for they say and do not do. Matthew 23:3 (NKJV)
Take the online test

Song of The Pharisees

Spanish Bible Activities Select story #213 in the list for activities to accompany this Bible story.