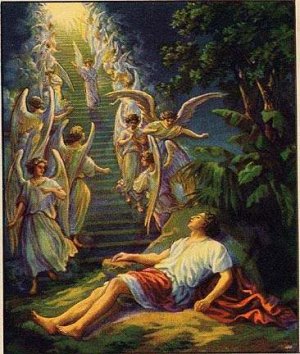 Another picture of Jacob

Jacob and Esau were twins, but Esau was born first. As the first to be born, he would get a bigger share of their father's wealth.

Jacob worked near the family tents, but Esau was a hunter. Jacob had smooth skin, but Esau had a lot of hair on his body.

One day Jacob tricked Esau into giving him the birthright, or the right to Isaac's wealth. Esau was very hungry and Jacob would not give him any of the stew he was cooking until he agreed to sell the birthright to him.

Isaac wanted to give Esau a blessing and asked Esau to go hunting and prepare some food for him. The boys' mother heard the plan and prepared the food for Jacob to take to his father Isaac. She put hairy goat skins on Jacob's hands and neck and had him to dress in some of Esau's clothes in order to trick their father. It worked. Jacob lied to his father and got the blessing that was intended for Esau.

Esau was very angry when he got home from hunting and Jacob had to run away, or be killed. When night came, he took a stone and used it for a pillow.

Jacob had a dream. He saw a ladder with angels going up and down the ladder. God was standing at the top of the ladder. He promised to protect Jacob, give him a huge family, and give his family all the land where Jacob was resting. When Jacob woke up, he worshiped God. He promised if God would be with him, he would give God one-tenth.

Later Jacob married and had twelve sons. His name was changed to Israel, and his family became known as the twelve tribes of Israel.

Read the story in Spanish Jacob

What does this story
mean to me?
Jacob and Esau were twins. Esau was older, so he was entitled to his father's birthright. However, Jacob and his mother tricked Isaac into giving him the birthright. He deceived his father and brother.

God had chosen Jacob to be the father of the twelve tribes. God knows the final outcome and He has a plan for us. Things may not always seem fair in our eyes, but remember, God is in control and His way is always the right way.

Memory Verse
And God said unto him, Thy name is Jacob: thy name shall not be called any more Jacob, but Israel shall be thy name: and he called his name Israel. Genesis 35:10
Take the online test

Spanish Bible Activities Select stories #22-27 in the list for activities to accompany this Bible story.