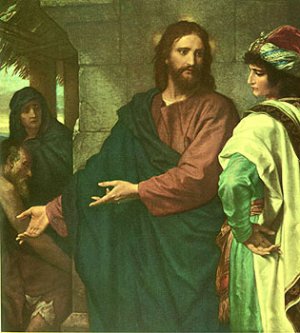 One day a young ruler came to Jesus and fell on his knees before him. He said, "Good teacher, what must I do to get eternal life?"

Jesus told him to keep the commandments. "Which ones?" the man asked.

Jesus started quoting some of the 10 commandments; "Do not murder, do not commit adultery, do not steal, do not give false testimony, honor your father and mother."

Then he mentions a commandment, not one of the 10 commandments, but one from the book of Leviticus, "Love your neighbor as yourself." In Leviticus 19:18 the people were told to not seek revenge, or to bear a grudge against one of their people, but instead they were to love their neighbor as they loved themselves.

The young man said he had kept all these commands from the time he was a boy. He had lived a good life. The Bible says that Jesus looked at him and loved him, but Jesus looked into the man's heart and saw something that was keeping him from becoming a follower.

Jesus told him that he still lacked one thing; he must sell the things he owned and give the money to the poor. Then he would have treasure in heaven, and he could follow Jesus.

The young man's face fell and he sadly went away because he had great riches that he would not part with.

After the young man left, Jesus talked to his disciples about how hard it is for a rich man to enter the kingdom of heaven. "It is easier", he said, "for a camel to go through the eye of a needle, but with God all things are possible."

What does this story
mean to me?
When we read the story of the young ruler we learn the importance of putting Jesus first. The ruler thought he was a really good person. He did not mistreat people, and he obeyed the laws.

But the love of money was his weakness. He probably thought that he could take care of himself without God's help.

Whether you have a little money or a lot during your lifetime, you still need God's help.

Sometimes children use their allowance money to help others rather than spending it on themselves. They have learned to put God first. You can learn at an early age to put God and others ahead of yourself. You will be blessed if you do.

Memory Verse
No one can serve two masters. Either he will hate the one and love the other, or he will be devoted to the one and despise the other. You cannot serve both God and Money. Matthew 6:24 (NIV)
Take the online test

Spanish Bible Activities Select story #214 in the list for activities to accompany this Bible story.