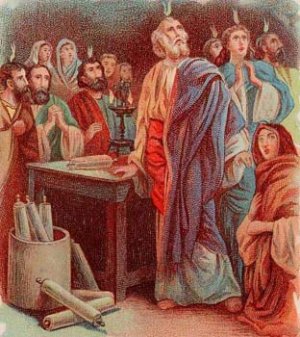 The Jewish people were commanded by God to observe several feasts during the year. They celebrated the Feast of the Passover to remember the time in Egypt they had been "passed over" when the firstborn of the Egyptians had died in the plagues.

Fifty days after Passover, they celebrated the Feast of Pentecost (PEN te cost). It was also called the Feast of Weeks, which came on a Sunday and lasted one day. It came at the end of the wheat harvest.

The events in this story took place on the Pentecost following the death and resurrection of Jesus. Many devout Jews were in the city of Jerusalem to celebrate the feast. They had come from many districts and spoke many languages.

After the death of Judas, Matthias (muh THI us) had been chosen to be an apostle, and he was added to the eleven apostles. Suddenly a loud sound filled the house where they were meeting. It sounded like a great wind blowing.

Then something that looked like tongues of fire appeared, then separated and sat on each of them.

They began speaking in other languages. The Holy Spirit was causing them to talk to the others in languages which they had never learned! Can you imagine being able to carry on a conversation with a foreigner in his own native tongue, even though you had never spoken that language?

The wind sound was so loud that people ran to see what was happening, and when they heard the men speaking in their own languages, they were amazed. "Aren't these men all Galileans (gal uh LEE unz), or men from Galilee? How is it that each of us hears in our own native language?"

Some thought the men were drunk, but that was unlikely because it was only 9:00 in the morning. Most people who get drunk, don't get drunk that early in the day.

Peter stood up with the eleven apostles and began to preach to the crowd. He said that the prophet Joel had spoken of these events many years before.

He told them how that Jesus of Nazareth had come, and how that God had shown his approval of Jesus by the signs and miracles that he had performed while he was on earth.

Peter accused the crowd of handing Jesus over to wicked men to be crucified. We remember that Pilate wanted to free Jesus, but the Jews had cried out, "Crucify him!". The Romans nailed him to the cross and killed him, but God raised him from the dead, and he was seen alive by many people.

When the people in the crowd realized what they had done, they were so sorry, and they asked Peter and the other apostles, "Brothers, what shall we do?"

Peter told them to repent; to be truly sorry for what they had done, and for every one of them to be baptized in the name of Jesus so that their sins might be forgiven. He said if they would do that, they would receive God's gift to them, the Holy Spirit, to live within them.

Those who heard his words and accepted them, were baptized, and about 3,000 people did just that.

This wonderful day was the beginning of the Church.

What does this story
mean to me?
In this story we see Peter as he overcame his past failures. You will remember that at one time he even denied Jesus, saying he didn't even know him. But on this Pentecost day Peter becomes a powerful speaker for God.

You may have made some mistakes in the past, but don't talk to yourself about those failures saying, "I'm no good", or "I can't do that". Leave those things behind and start telling yourself, "Yes, I can do this!".Phillippians 4:13 "I can do all things through Christ who strengthens me."

Ask God to help you overcome your past mistakes. Peter did and he became a powerful Christian.

You can read about Pentecost in the Bible in
Acts 2:1-41

Memory Verse
Repent and be baptized, every one of you, in the name of Jesus Christ so that your sins may be forgiven. And you will receive the gift of the Holy Spirit. Acts 2:38 (NIV)
Take the online test

Spanish Bible Activities Select story #245 in the list for activities to accompany this Bible story.