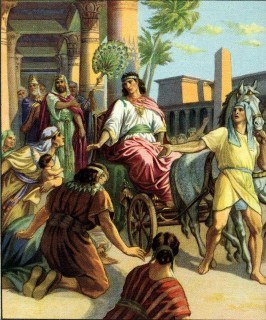 Joseph became a ruler in Egypt. Pharaoh was the only person in the land who had more power. Joseph was given a wife and they had two sons.

Jacob sent 10 of his sons to Egypt to buy grain for food. The brothers bowed down before Joseph. He knew who they were, but they didn't recognize him. He gave them food, kept one of the brothers in prison, and told them that when they came again, they would have to bring their youngest brother. (Benjamin was Joseph's own brother.)

Jacob was afraid to send Benjamin, but Benjamin went with the brothers when they returned to Egypt to buy grain a second time. This time Joseph told them who he really was. They were afraid because of the way they had treated him, but Joseph was forgiving.

He told them to go and get their father and move him and their families to Egypt because the famine would not be over for a long time.

Jacob was so happy when they told him about Joseph. Jacob and all the family moved to Egypt and he was able to see his son again.

The famine lasted for 7 years. The Egyptians spent all their money for grain. Then they traded their livestock for food, and finally their land. They all became servants to Pharaoh, but Joseph's family lived in the land of Goshen and had plenty of food.

Read the story in Spanish José

What does this story
mean to me?
Joseph's brothers treated Joseph unfairly when they thought that their father loved him more than he loved them. They were jealous, especially when Joseph received a beautiful coat and when Joseph told them of his dreams of the brothers bowing down to him. They sold him into slavery, thinking they would never see him again.

However, God was going to use their evil deed for good. After many years of separation, they learned of Joseph's identity and realized that they had wronged him.

How about you? Have you ever done something wrong to someone else or have been mean to them? Joseph forgave his brothers. How can you get someone to forgive you? When you have been forgiven, how did you feel? When God forgives our sins, He forgets they ever existed. Kinda neat, huh?

This story about Joseph and his brothers can be found in the Bible in Genesis chapters 42-47.

Memory Verse
Be ye kind one to another, tenderhearted, forgiving one another, even as God for Christ's sake hath forgiven you. Ephesians 4:32 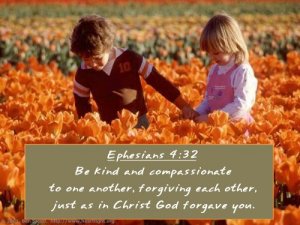 Song of Joseph and His Brothers

Memory Puzzle Joseph and His Brothers

Spanish Bible Activities Select stories #31-33 in the list for activities to accompany this Bible story.


Books
Press "Go" to search for books about Joseph.
Credits and Solutions
"Be ye kind" poster courtesy of Heartlight