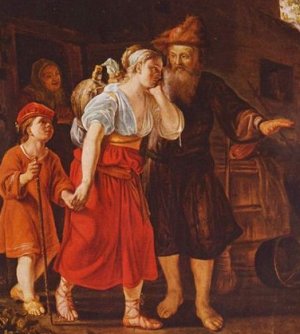 Hagar was the servant to Sarai (Sarah) who was the wife of Abraham. God had promised Abraham a family, but as yet he and his wife had no child. Sarah had given up and told her husband to take her handmaiden as his second wife. After a time Hagar learned she was going to have a child. However, this was not an occasion for happiness in the family. Jealousy arose between the two women. Hagar began to despise Sarah and Sarah started to mistreat Hagar to the point that she ran away from home.

She fled into the wilderness and there the Lord found her by a spring of water. God talked to her. He asked her why she was there. When she told him she was running away from her mistress, the Lord told her to return to Sarah and be obedient to her. He told her to name her son Ishmael, and He also told her what sort of person Ishmael would grow up to be. "He shall be a wild man; his hand shall be against every man, and every man's hand against him, and he shall dwell in the presence of all his brethren."

Hagar called the name of the Lord "You-Are-the-God-Who-Sees" because God had seen her plight and taken pity on her. The water well she was near would be called the "Well of the One Who Lives and Sees Me".

She did as the Lord commanded and returned home. In due time gave birth to her son, Ishmael. Abraham was eighty-six years old at the time. The child grew up. During all those years Abraham thought Ishmael was going to be his heir, but God appeared to him again and told him that he and Sarah would have a son, Isaac, and Isaac would be the one through whom the blessings would come. Abraham pleaded for Ishmael. God told him Ishmael would indeed be a great man, but not the son of promise. Ishmael's family would become a great nation and he would have twelve sons, princes.

Conditions became worse after the birth of Isaac. One day Sarah saw Ishmael scoffing or making fun and she became angry and told Abraham to send Ishmael and his mother away. This made Abraham very sad because Ishmael was his son also. God told him to listen to his wife Sarah and do as she said. He sent Hagar and Ishmael away, giving them some bread and water for their journey. When the water was used up she put him under a shrub and sat down a short distance from him. She thought they were going to die of thirst.

God heard the voice of the child. An angel spoke to Hagar and reassured her things were going to be alright. Ishmael would grow up and become a great man. She looked again and saw a well of water. She got water for them and they survive

Ishmael did grow up and his descendants become a great nation of people. He became an archer, a marksman with a bow and arrow. When he was older his mother chose a wife for him, a woman from her homeland, the land of Egypt.

We read again of his descendants in the story of Joseph. The traders who took Joseph into Egypt were Ishmaelites. "Behold, a company of Ishmaelites came from Gilead with their camels bearing spicery and balm and myrrh, going to carry (it) down to Egypt" - (Genesis 37:25).

In the New Testament Paul uses the two women Sarah and Hagar to tell a story about God's dealings with people in different times. Galatians 4:21-31.

Read the story in Spanish Hagar

What does this story
mean to me?
Hagar believed in God in spite of great difficulties in her life. God showed her a way to survive and reassured her of His care for her and her child. Her faith was strengthened and she was able to overcome the trials she was facing.

We may face hard times and become ready to give up, but God is still there faithful to help us through those hard times.

You can read about Hagar in
Genesis 16

Memory Verse
Therefore humble yourselves under the mighty hand of God, that He may exalt you in due time,
casting all your care upon Him, for He cares for you. 1 Peter 5:6-7 NKJV
Take the online test

View a Slideshow about Hagar

Spanish Bible Activities Select story #16 in the list for activities to accompany this Bible story.


Books
Press "Go" to search for books about Hagar.
Credits and Solutions
"Hagar" by Jan Victors courtesy of
Wikipedia

"Hagar and Ishmael by von August Wittig"courtesy of
Wikimedia Commons