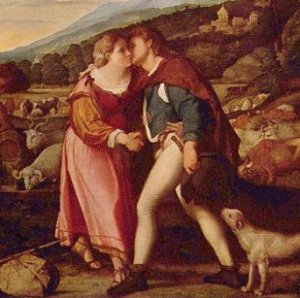 Rachel was a shepherdess. She cared for the sheep of her father Laban. She brought the sheep to a well where the shepherds watered their sheep. On this particular day Jacob, her cousin, was also at the well. He was running away from his brother Esau, and his mother Rebekah had told him to go to the land of her people. The other shepherds at the well told him the young woman arriving was Laban's daughter.

There was a large stone over the top of the well. Jacob removed the stone and watered her sheep for her. Then he kissed Rachel and cried. He told her who he was. She ran and told her father who went out to meet Jacob and took him home with him.

He worked for Laban a month and then they talked about wages. By this time Jacob was in love with Rachel. She was the younger of Laban's daughters and very beautiful. She had an older sister Leah who was not as pretty. Jacob agreed to work for Laban seven years if he would give him Rachel to be his wife. The time flew by for Jacob because he loved her so.

When the seven years were up Jacob asked for his wife and a wedding was prepared. At last he would have his beloved Rachel. The bride was probably heavily veiled so Jacob had no way of knowing he was marrying Leah the older sister instead of Rachel. The next day when he saw his bride without her veil he realized he had been tricked! He had married Leah instead of Rachel. Her father told Jacob in their country it was customary for the older daughter to marry first.

Seven long years and he still didn't have Rachel for a wife. Laban said if he would work another seven years he could have Rachel also. So after a week there was another wedding and this time Rachel became his wife.

So now Jacob had two wives and they each had a handmaiden. They all began having sons, everyone except Rachel and she had no children. After ten sons and a daughter were born to Jacob, God remembered Rachel and she also was able to have a son. She called his name Joseph. He would become the favorite son of Jacob because of his great love for Rachel.

After twenty years had passed Jacob wanted to leave Laban. They agreed that Jacob could have all the sheep that were spotted and speckled and Laban would keep the unblemished sheep. When the lambs were born, all the strong ones were spotted and speckled so Jacob had a large flock of sheep. Jacob had to serve him another six years for the flocks, but Laban still didn't want him to leave with Leah and Rachel and all their children, so Jacob left secretly while Laban was away. Before they left, Rachel stole some household idols that belonged to her father.

After three days Laban learned they were gone. It took him seven days to catch up with them. Before he got to them God spoke to him and told him not to harm Jacob. When he reached the place where the family was camped he accused Jacob of taking his idols. Jacob told him he could search for them. Rachel had put them in the camel's saddle and was sitting on them. She didn't get up from her seat and Laban never found the stolen goods.

Laban and Jacob talked and came to an agreement. Laban kissed his daughters and grandchildren and went back to his home. Jacob and his family continued on to his homeland. 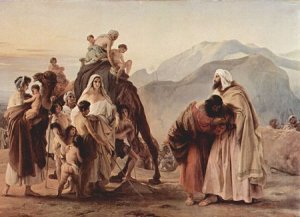 As they came near they were met by Esau, the brother he had tricked so many years before. Esau had 400 men with him. Surely he meant harm to to them. Jacob separated out a large flock of animals as a peace offering to Esau. He put his family behind him, first the maid servants, then Leah and her children, and at the very back Rachel and Joseph. He wanted her in the most protected place.

Jacob was expecting an attack. He prayed to God for protection and that night he wrestled with Him. God blessed him there and changed his name to Israel. The next morning when he met Esau, his brother was forgiving and reluctantly accepted the gifts of cattle Jacob sent to him.

Rachel had one more son, but she died when he was born. As she was dying she named him Ben-Oni which means "son of my sorrow", but Jacob changed his name to Benjamin which means "son of the right hand". Jacob now had twelve sons. We call their descendants the twelve tribes of Israel.

Read the story in Spanish Raquel

What does this story
mean to me?
All of our actions have consequences. Jacob's deceitfulness when he was young caused him to be separated from his brother for many years. You will also notice in this story that just as Jacob deceived his brother Esau, so he himself was deceived by Laban when Laban switched brides on him. "What goes around, comes around" as illustrated in our memory verse Galatians 6:7-8.

If you want good things to come to you, you must act right and do the things you should.

You can read about Rachel in
Genesis chapters 29-33

Spanish Bible Activities Select story #25 in the list for activities to accompany this Bible story.