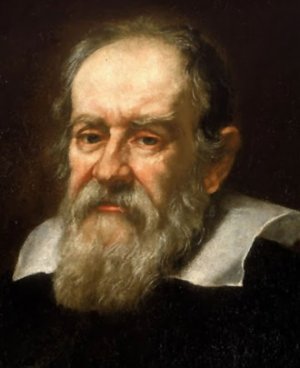 Galileo Galilei ( gal ih LAY oh gal ih LAY ee) was born in Pisa, Italy on February 15, 1564. His father, Vencenzio, was a musician and a mathematician. He was Galileo's teacher until he was ten years old. At that time the family moved to Florence. The boy was tutored for a while and then attended a monastery* where he studied Latin, Greek, logic, music, and religion.

While he was a student at the University of Pisa he began to study the pendulum by watching a suspended lamp swing back and forth in the cathedral. From these first observations came his theory for the pendulum clock. Near the end of his life he would design the first pendulum clock. 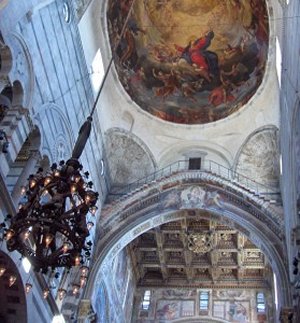 The Lamp of Galileo

Galileo is called the Father of Modern Science. He was the first to develop a scientific theory in which he would observe an event, develop a theory and then experiment to test his theory.

He studied motion and performed experiments by dropping objects from heights such as the Leaning Tower of Pisa. He wanted to disprove Aristotle's idea that heavier objects fall faster than lighter ones. According to legend he dropped two objects of different weights and proved that two falling objects of different weights reach the ground at the same time. You can view a photograph of a falling objects demonstration. 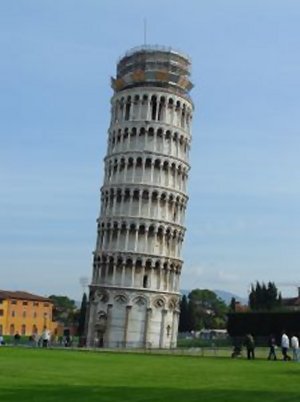 In this video astronaut David Scott demonstrates Galileo's theory of falling objects by showing how they behave in a weightless environment.

Nicolaus Copernicus (nik uh LA us ko PUR nih kus) about twenty years before Galileo was born published a theory that the earth revolved around the sun. It was called the Copernican (ko PER nih kuhn) Theory, but he died before he could prove it.

Galileo decided he would either prove Copernicus' theory or else show it was false. In 1609 he heard about an invention which enabled people to see things far away. It was the telescope. He reproduced it and studied the moon and the planets. He discovered four bright "stars" revolving around Jupiter and concluded they must be planets near Jupiter. He called them Medician (med uh CHEE un) Stars to honor his patron in the influential Medici (MED ih chee) family. These moons of Jupiter are now named Io, Europa, Ganymede, and Callisto. Shortly after his discovery he was appointed Chief Mathematician of the University of Pisa. He would hold the title for life.

Galileo concluded that if "planets", as he called them, could revolve around another planet, then the planets could also revolve around another body such as the sun. His view of the cosmos* is known as heliocentrism.* This model is shown at the bottom of the illustration with the sun in the center. The upper part of the illustration shows a geocentric* model with the earth at the center. 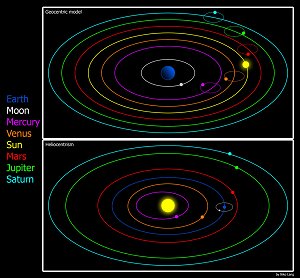 Galileo went to Rome and appeared before the Roman Church to defend his views, but the Church considered them heresy* since his ideas were contrary to the Ptolemaic view that the sun revolved around the earth, which they considered the Biblical view. He was forbidden to discuss or write about his theory.

When a new pope was appointed Galileo had new hope that he would be heard. In April 1624 he traveled to Rome and had six audiences with Pope Urban VIII. As a result of his visit he was permitted to discuss his theory as long as he treated it as a mathematical hypothesis.*

However, after the printing of Galileo's book Dialogue* he was summoned to appear before the Inquisition.* Galileo replied that he was too ill to go to Rome. He was told he would be arrested and brought in chains if he did not come. He went to Rome where he was questioned for 18 days.

At an Inquisition the accused person had to testify, but could not ask questions nor be represented by counsel. Sometimes a person was tortured to get them to "confess", and the sentence could not be appealed.

They condemned him for heresy and put him under house arrest. He was released for a while, but there would be further hearings and he would remain under arrest the remainder of his life. Five years after his sentencing he became totally blind. He asked to be released from his imprisonment, but his plea was denied.

During his lifetime Galileo had three children; two girls and a boy. His girls were Virginia and Livia who were both raised in convents and his son, Vencenzio, was named after his grandfather, Galileo's father.

Galileo respected people. He is quoted as saying "he never met a man so ignorant but that something might be learnt from him." He did not have unkind words even for those with whom he totally disagreed.

Galileo died on January 8, 1642 while still under house arrest at his home in Arcetri near Florence.

monastery
MAHN uh ster e
Function: noun
a place where a community of monks or nuns live and work

heliocentric
he le oh SEN trik
Function: adjective
1 : referred to or measured from the sun's center or appearing as if seen from it
2 : having or relating to the sun as a center

hypothesis
hi PAHTH uh sus
Function: noun
something not proved but assumed to be true for purposes of
argument or further study or investigation

dialogue
DI uh log
Function: noun
1 : a conversation between two or more persons
2 : conversation given in a written story or play

Inquisition
in kwuh ZISH uhn
Function: noun
capitalized : a. former Roman Catholic court for the discovery and punishment of heresy
b. : an investigation conducted with little concern for individual rights
c. : a severe questioning

geocentric
je oh SEN trik
Function: adjective
1 : relating to or measured from the earth's center
2 : having or relating to the earth as a center

Galileo Galilei
Institute and Museum of the History of Science

The Discovery of the Galilean Satellites (NASA)

Books
Press "Go" to search for books about Galileo.
Library

Galileo: The Genius Who Faced the Inquisition
by Philip Steele (selected pages)