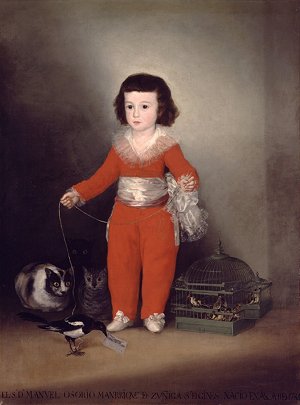 Francisco Goya was born in a small town near Saragossa, Spain. His father was a painter and a gilder, who is an artisan who applies thin sheets of gold to paintings such as altar pieces in churches. When he was fourteen he was apprenticed to a local artist. This was the beginning of his art career.

Goya was a non-conformist. He didn't like to follow the rules. He went to Rome for a year and then returned to Spain. It was during this time he did several large fresco projects. A fresco is a painting done on a wall or ceiling by using watercolors on fresh, moist plaster which has been applied to the surface.

He made drawings which were used as patterns for expensive carpets and etchings from which he could make prints. Ordinary people could afford to buy the prints. His work became popular because it was so accessible to many people.

His marriage to Josefa, the sister of a painter in the royal court, was the turning point of his career. He became the official court painter for King Charles III (the Third) and worked in the royal tapestry factory. Goya was allowed to keep the sketches which were called "cartoons".

At one time he had to go to court to be questioned about a painting he had done 18 years earlier. He then had to hide out from the authorities. He moved to a house outside Madrid and painted nighmarish scene on the walls, his "Black Paintings".

Wealthy people wanted him to paint portraits of themselves and their families. Some of them wanted to be painted as "majos" or "majas", young working-class men and women in Madrid who sometimes would dress up in brightly colored costumes and parade through the streets.

The featured work on this page, "Manuel Osorio de Zuniga" was painted during this period of his life.

Goya and Josefa had six children, but sadly only one of them, Xavier, survived. All the others died in infancy.

In 1792 Goya suffered an illness which caused him to become deaf. His life changed, and so did his paintings. His works became very dark in color, and the subjects were evil-looking. He covered his walls with these depressing "black paintings".

He continued as the court painter for King Charles IV (the Fourth) who succeeded Charles III. He painted a family portrait for the king called "La Familia de Carlos IV". However, the finished picture was very unflattering. "The children cower, the king looks stupid, and the queen bad-tempered" (Quote from Fandex Field Guides, Painters) The king didn't dismiss him, but he never asked Goya to paint another family portrait for him. 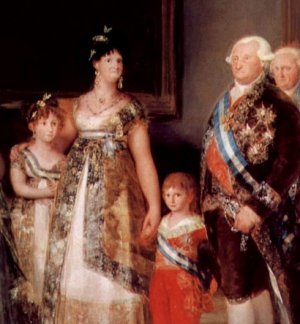 Charles IV of Spain and His Family (detail)
Enlarge

He recorded historical events. When Napoleon invaded Spain many Spanish citizens were killed. To depict the Spanish resistance Goya painted Second of May in 1808. When asked why he painted such a picture he replied, "To warn men never to do it again". 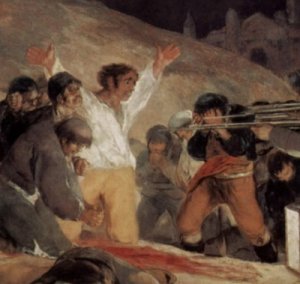 The Third of May (detail)
Enlarge

When he wanted to make a statement about the politics of the time, he painted a series of pictures called Caprices. He would depict a person as a donkey or paint other scenes to ridicule certain people. This painting is called El Vergonzoso or The Shameful. Los Caprichos showed people being tortured by the Spanish Inquisition. 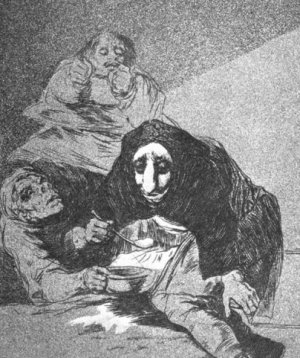 Sometimes he painted pictures just to show people doing everyday things such as enjoying a day of kite flying. 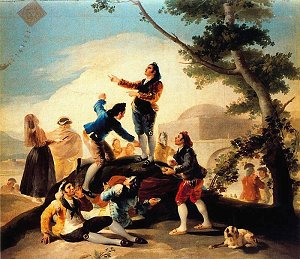 In 1792 after an illness he became deaf. He became despondent and began to draw bizarre pictures featuring monsters, skeletons, and death. He wanted to show the horrors of men's cruelty to each other.

In 1823 Goya signed over to his grandson his house, which was known as the "House of the Deaf Man". He left Spain and moved to Paris. Three years later he returned to Spain for a visit. The king granted him a retirement pension and ordered an official painting of Goya to be done by Vincente Lopez.

His eyesight began to fail, then he suffered paralysis, and finally died in 1828 at the age of 82. He was buried in France, but later his remains were moved to Spain and buried in Madrid. 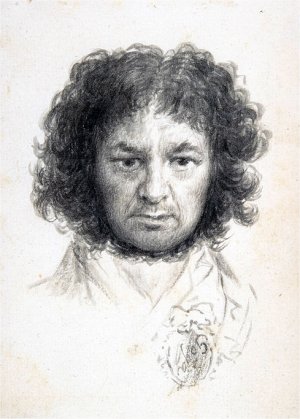 Other Activities
View a slideshow about Francisco Goya

Francisco de Goya
from the Artchive

Goya
at the National Gallery of Art

Prints and Their Makers
by Fitz Roy Carrington 1912 (full view)