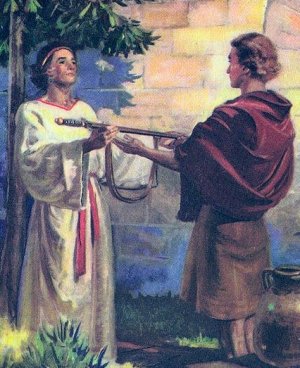 Jonathan, the King's son, was kind. He was a good friend to David. They make a promise to each other that whatever happened, they would always be friends

David wanted to leave the palace. He was afraid King Saul would kill him. But Jonathan did not want him to go. "My father will not hurt you," he said. "He always tells me what he wants to do."

But David was still afraid. He knew that he was in real danger. King Saul began to hate David. He told Jonathan to kill him. But Jonathan loved David and so he made a plan. "In a field not far from here, there is a great stone," said Jonathan. "Go and hide behind it. In three days, I will come with my servant and shoot three arrows by its side. If I say to my servant, 'Go and find the arrows, they are on this side of you, bring them here,' then you will know that it is safe and there is no danger. But if I say to the boy, 'Look the arrows are beyond you,' then you must run away for there is great danger."

So David hid in the field. Jonathan went to King Saul. He begged him not to kill David. King Saul did not listen. He became very angry. He threw his sword at Jonathan, but it missed him.

Jonathan ran from the palace, calling his servant. He went to the field near the great stone. Soon his arrows flew through the air. "Find the arrows," called Jonathan. "They are beyond you!"

David heard and he was very sad. The servant found the arrows. Jonathan sent him home. Then David came out of his hiding place. He put his arms around Jonathan. Jonathan told David of his father's plans to kill him and urged him to go far away where he would be safe. He asked David to remember that they would always be friends.

David ran away. He found a cave near the desert, where he lived for a long time.

Another picture of David and Jonathan 1

What does this story
mean to me?
We learn a lesson in friendship from the story of David and Jonathan. They were loyal friends throughout their lives. Are you a true friend? Do you take up for your friend if someone starts saying bad things about him or her? Do you come to their defense? You would want your friend to do the same for you.

The story of the friendship of David and Jonathan can be found in the Bible in First Samuel chapter 20.

Memory Verse
Jonathan said to David, "Go in peace, for we have sworn friendship with each other in the name of the Lord." First Samuel 20:42
Take the online test

Song of David and Jonathan

Would you like to study an Art Lesson about David Playing Before Saul?

Spanish Bible Activities Select story #80 in the list for activities to accompany this Bible story.


Books
Press "Go" to search for books about David and Jonathan.
Credits and Solutions
Puzzles on these pages courtesy of
Songs of Praise and Armored Penguin