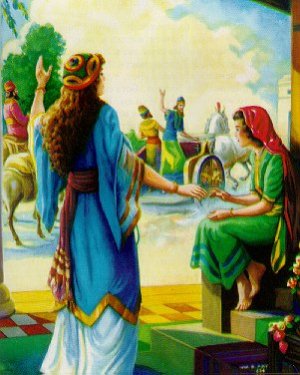 Naaman was a great soldier, but he had a skin disease called leprosy.

A young girl from Israel who was a slave, served Naaman's wife. She told about a prophet who could cure his leprosy.

Elisha, a man of God, asked to see Naaman. He told Naaman to wash seven times in the Jordan River. Naaman was angry because he did not expect to be cured this way. He thought Elisha would wave his hand over him and cure him. He also thought the rivers in his country would be better than the Jordan River. But he decided to obey. He dipped one, two, three, four, five, six, seven times. When he obeyed what had been told him, his leprosy was gone.

He was so happy! He said, "Now I know the God of Israel is the only God."

Read the story in Spanish Naaman

What does this story
mean to me?
Naaman was not healed until he obeyed God. When God tells you to do something, just obey. Don't question the words of the prophet. (The "prophet" for us today would be the scriptures, the written word of God.)

You may not understand the reasons behind what your parents require of you, but just obey. They have had more experience and know of pitfalls that you may not be able to see. Many things can be learned vicariously (through the experiences of others), and you can be spared the consequences of some bad decisions.

This story about Naaman can be found in the Bible in Second Kings chapter 5.

Memory Verse
So he went down and dipped himself in the Jordan seven times, as the man of God had told him, and his flesh was restored and became clean like that of a young boy. Second Kings 5:14
Take the online test

Spanish Bible Activities Select story #107 in the list for activities to accompany this Bible story.

Read and hear the story of Naaman from Kids' Bible Stories


Books
Press "Go" to search for books about Naaman.
Credits and Solutions
Picture courtesy of Crossmap.com