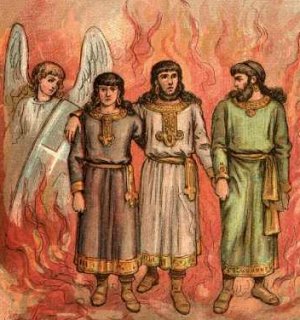 King Nebuchadnezzar made a huge gold idol. It was 90 feet tall and 9 feet wide. The king told the people, "When you hear the music play, everyone must bow down to the idol. If you don't bow down, you will be thrown into a blazing furnace."

They said, "Our God will deliver us from the burning fiery furnace, and even if He doesn't deliver us, O king, we will not serve your gods, nor will we worship the golden image which you have set up." What bravery!

The king had the furnace heated 7 times hotter than usual. He had the men tied up and thrown into the furnace. The fire was so hot, it killed the men who threw them in. When the king looked into the fire, he was amazed. The men were untied, walking around, and there was a fourth person in the fire with them! He said, "Didn't we throw three men in the fire? I see four men loose, walking around, and they are not hurt." The fourth person looked like a heavenly being (like the Son of God - KJV).

The king called their names and ordered them to come out of the fire. When they came out, they were not hurt at all. Their hair had not been burned, and they didn't even smell like smoke.

The king made a law that everyone should honor the God of Shadrach, Meshach, and Abednego because no other God could deliver like he could.

What does this story
mean to me?
The three young men were punished because they would not bow down to the idol. Today you may not see idols made of wood or stone, but there are still idols around. Whatever people serve bcomes their idol. Some people spend all their time making money and have no time for God. Money can become an idol. Fame, popularity, and seeking only pleasure can consume a person and become an idol.

Does serving God come first with you, or does something else have priority in your life?

This story about the Three Hebrew Children can be found in the Bible in
Daniel chapter 3.

Memory Verse
Then Nebuchadnezzar said, "Praise be to the God of Shadrach, Meshach and Abednego, who has sent his angel and rescued his servants! They trusted in him and defied the king's command and were willing to give up their lives rather than serve or worship any god except their own God. Daniel 3:28

Spanish Bible Activities Select story #157 in the list for activities to accompany this Bible story.